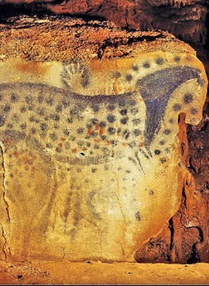 Recent findings have added to a growing tide of information showing the contribution of women throughout human history, by showing that some of the first artists were female.

By comparing the relative lengths of certain fingers, researchers determined that three-quarters of the hand prints were female.

Many of the hand stencils surrounding the famous Spotted Horses mural in France’s Pech Merle cave belonged to women. Until recently it was assumed that the 25,000 year old mural and prints were produced by male hands.

It has long been assumed that men were behind ancient depictions of animals, which were the major subject of pre-historic paintings, due to their habit of hunting while females raised children and gathered plants.

The assumption said that as the hunters, men were more knowledgeable about animals' size, strength and shape.

But as both sexes were probably involved with dismembering the kill, the updated view says women would easily have gained the necessary anatomical information.

The findings add to the weight of information showing that women have made equally valid contributions to human expression as men, arguing both genders must be placed in the same historical regard.

The latest study on the European cave paintings has been published in the Journal of the Society for American Archaeology.