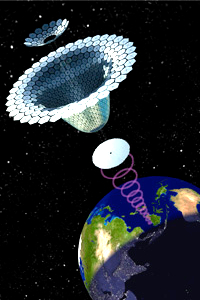 The United States military is working on a project to gather solar electricity from space and beam it wirelessly back to Earth.

The US Naval Research Laboratory has built a small module that can capture and transmit solar power from space, and are planning to ramp up the idea for a possible extra-terrestrial trial.

The tile-shaped satellite features a photovoltaic panel on one side, with an antenna to beam the power on the other. Sandwiched inside the tile are electronics to convert the direct current generated from solar sources into a radio frequency for transmission.

The device would be the end of the main argument against solar, which says it cannot gather electricity during the night time or under cloud cover. Space, it turns out, has no night time or clouds.

The US Navy said individual panels have performed well in tests so far, but there is an exponential increase in effort to build a complete array that could be operated in space.

For this reason, designers have drawn up plans with automated construction in mind; the idea is that large parts of the rig could be constructed by robots in space.

“The scale of things is where it starts to get really difficult,” said Mark Bünger, research director at Lux Research, because “the biggest problem is the cost of getting to space.”

The Navy lab is also working on the space robots themselves, and says that the technology to build receivers on Earth already exists. 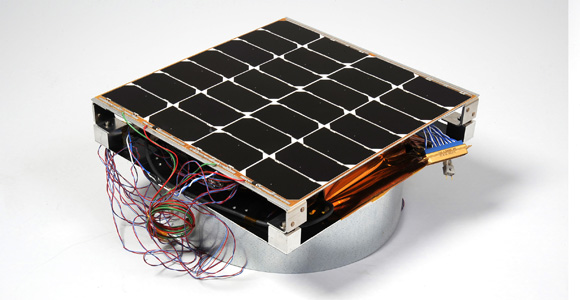 “People might not associate radio waves with carrying energy because they think of them for communications, like radio, TV, or cell phones. They don’t think about them as carrying usable amounts of power,” said lead engineer Paul Jaffe in a news release.

The potential benefits are massive, and for the US military quite clear. Rather than the current practice of shipping diesel generators and parachuting fuel supplies, they say their entire military operation could be powered with solar receivers.

Lowering the frequency of the beam carrying the power allows more reliability in extreme weather.

Beaming solar power from space is an idea in the works for several companies, but building renewable networks on Earth is still a much more feasible and viable solution to current and future fossil fuel shortages.