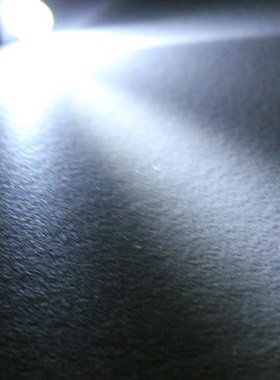 A new polymer has been created which emits white light more efficiently than organic LEDs.

With household lighting just catching up to the benefits of LED, the new development could mean swapping the bulbs sooner than expected.

White has always been a tricky task for LED makers; with the traditional design clumping red, green and blue bulbs together to create a white hue.

Researchers at the University of Utah have now come up with a simpler way to get white, combining polymer chains with heavy atoms.

In current organic LEDs it is simple to attain blue, but getting red from its ‘triplet state’ has been quite challenging. It has been made easier in previous years by adding a heavy element like iridium, platinum or palladium into the polymer chain, this idea has been expanded by the research now published in the Nature journal Scientific Reports.

Professor Valy Vardeny says: “The idea is to incorporate the heavy atom into the chain so that you don't have to rely on mixtures or energy transfers. The compound itself contains all the ingredients.”

“The idea ultimately is to mix this polymer with different platinum units so we can cover the whole spectrum easily and produce white light.”

"The organics are also very flexible... you can do all kinds of fixtures which you cannot do with LEDs, because polymers are flexible while LEDs are based on crystals."

The brilliant white polymer could prompt the development of a new type of solar cell that converts light in electricity much more efficiently.

“In current solar cells, for each photon that is absorbed it generates one electron and hole pair,” says Vardeny.

However, by utilising the platinum-rich polymer's triplet state; “photons with a sufficient amount of energy when absorbed by the polymer chain may produce two triplets that can dissociate into two electrons and two holes, and thus double the amount of photocurrent.”