Water printer to turn the page on office waste 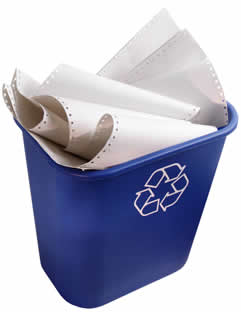 Every day tonnes of paper is printed on, handed to someone, virtually ignored and then thrown away, but a new development could see the end of single-use paper wastage.

Chinese researchers have created a sheet that can be re-printed dozens of times by a normal printer filled with water for ink.

It is difficult to estimate the full effect of our decimation of forests to make paper, but it is well known that the environmental impacts flow through the atmosphere, species diversity and the livelihoods of millions.

Reusable paper would take a big chunk out of the negative impacts that humanity’s old habits continue to create.

The trick lies in the paper, which is treated with an invisible dye that colours when exposed to water, then disappears.

The print fades away within about 22 hours at temperatures below 35°C as the water evaporates, fading even quicker when exposed to heat.

“Several international statistics indicate that about 40 percent of office prints [are] taken to the waste paper basket after a single reading,” said Sean Xiao-An Zhang, a chemistry professor at Jilin University in China, who oversaw work on the innovation.

If each page was re-used only a dozen times, the cost would still be about one-seventeenth of the inkjet version.

“Based on 50 times of rewriting, the cost is only about one percent of the inkjet prints,” Zhang said.

Dye-treating the paper adds about five per cent to its price, which is more than compensated by savings on ink. Importantly, the new method also does not require a change of printer, just a normal ink cartridge filled with water.

Previous work in the quest for a disappearing ink has tended to yield a low-contrast, high cost, and sometimes hazardous print.

The team used a previously little-studied dye compound called oxazolidine, which made a clear, blue print in less than a second.

They have managed to create four water-printed colours so far - blue, magenta, gold and purple - but can only print in one hue at a time for now.

Researchers say the dyed paper is “very safe”, but toxicity tests are underway on mice to be sure.

More details are available in the full report, published in the journal Nature Communications.