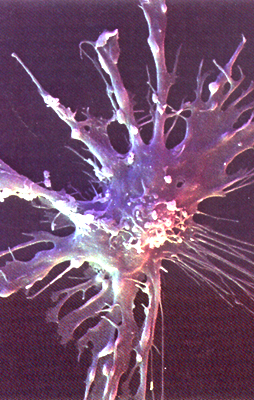 Patents are pending on an exciting new DNA-based vaccine for HIV and Hepatitis C, with University of Adelaide researchers saying they have made a major breakthrough.

The new approach employs a relatively simple but effective technique to stimulate the body's immune system response, causing it to help deliver vaccine.

The research has focused on ‘dendritic cells’ in the immune system, which are a type of white blood cell that play a key role during infection and vaccination.

“What we've done is incredibly simple, but often the simple things are the best approach,” said Professor Eric Gowans from the University of Adelaide.

“We're not targeting the dendritic cells directly - instead, we've found an indirect way of getting them to do what we want.

“There's been a lot of work done in the past to target the dendritic cells, but this has never been effective until now,” he said

The vaccine includes a protein that causes a small amount of cell death at the point of vaccination.

“The dead cells are important because they set off danger signals to the body's immune response,” Professor Gowans says.

This results in inflammation, and the dendritic cells become activated. Those cells then create an environment in which the vaccination can be successful.”

The vaccine is delivered directly to the skin, using a specialised needle that can penetrate just 1.5 mm below the surface.

“We chose the skin instead of the muscle tissue, which is more common for DNA vaccines, because the skin has a high concentration of dendritic cells,” Professor Gowans said.

Because the technique has the potential to translate to other, more common viruses in addition to the devastating HIV and Hepatitis C, the project attracted seed funding from The Hospital Research Foundation, and additional funding from the National Health and Medical Research Council (NHMRC).

The research has reached the pre-clinical phase, with a patient study due next year.

“This technique has worked much better than I anticipated,” Professor Gowans says.

“We're now ready for a commercial partner to help us take this to the next phase, and we're in discussions with some potential partners at the moment.”