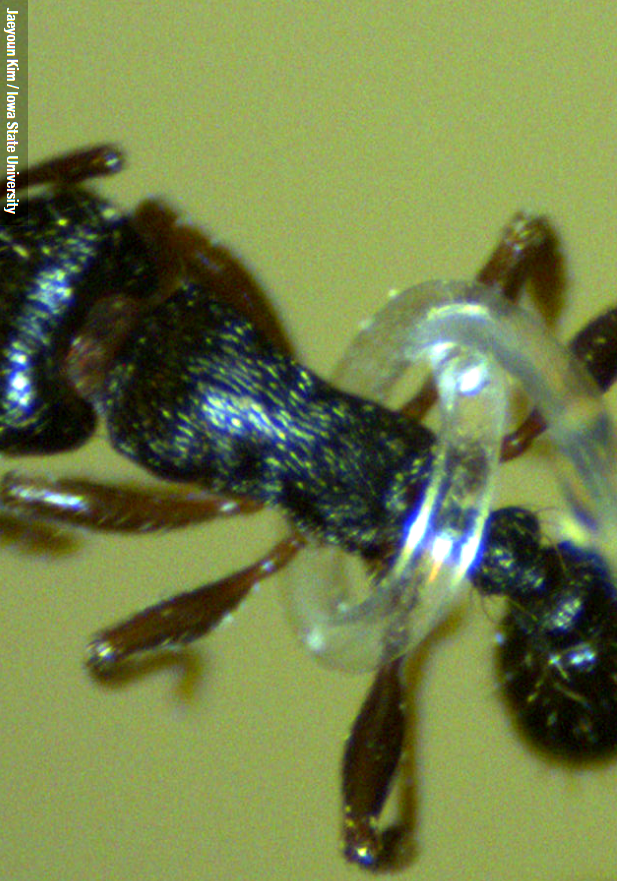 Engineers have developed a set of miniscule robotic tentacles so small they can lasso an ant or wrap around a human hair.

On a larger scale, the researchers hope the tentacles could give robots an astonishingly gentle but precise grasp.

Three material scientists at Iowa State University were working on a new way for robots to gently handle delicate objects.

They created clever micro-tentacles than can be extended and contacted into a spiral shape, to hug an object with less than 1 micro-newton of force.

“These micro-tentacles fuse those together.”

The tiny robotic tentacles have been made out of PDMS, a cheap, naturally soft, and commercially-available material.

PDMS is used to form hollow tubes which curl up when the air is sucked out of them.

To control the extension and contraction, one end of the tube is corked, while the other is connected to a pneumatic device that can inject or remove air.

The inner edge of the tube is thinner than the outer, so the tentacles always coil in the same way.

But while the device is relatively simple, devising it was certainly not.

PDMS is a near liquid substance, which means that the process of casting it over a micrometre-thin, rod-like template incredibly difficult, as it would bead together like a thin oil.

The research trio discovered they could heat-treat the material to slightly gelatinise it, which smoothed out and stomped it from beading.

They then faced the problem of how to remove the tubes from their cylindrical template without damaging them. They overcame this with a tool that resembles a tiny wire-stripper.

But the team faced a final significant obstacle in getting the tentacles to fully curl up on themselves.

They found that adding a sturdy ring of silicone rubber at the base of each tube somehow squeezed the material and made it curl more than it otherwise would.

This gave the tubes a usable, but not too powerful, tentacle grip.

The team has demonstrated the micro-tentacles’ ability to pick up objects like ants or fish eggs without damaging them.

The gentleness comes not only from the soft PDMS material, but from the fact that the tentacles spread their pinching force across their entire length.

This is distinctly different to mechanical tweezers, for example, which pinch an object with force at two specific points.

“There's a benefit here for microsurgery too... there's a great benefit to utilising tools you know can't accidentally damage the tissue around where you're working,” Dr Kim says.

More details are available in the journal Scientific Reports.