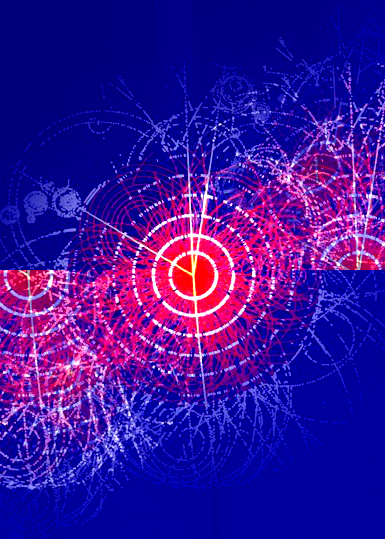 Data from proton-collision experiments at the Large Hadron Collider (LHC) may show a Higgs boson particle being tossed around like a ball between two other particles.

The latest ATLAS experiment data-analyses uncovered a collision of extremely rare, massive subatomic particles. The team behind the atomic smash say it could reveal the nuts and bolts of how Higgs bosons impart mass to other particles.

“We are basically observing the Higgs boson at work to see whether it does its job the way we expect it to,” study co-author Marc-André Pleier, a physicist with the ATLAS project, and researcher at the Brookhaven National Laboratory in New York, told LiveScience.

The Higgs boson, which was detected for the first time in 2012, is the long-sought missing piece of the Standard Model of physics. It has been proposed that the Higgs particle would explain how certain particles get their mass.

The theory goes that force-carrying particles known as W-bosons pick up mass as they travel through the ‘Higgs field’.

As particles drag through the field they become more massive.

If the Higgs field exists, then the Higgs boson should also exist as a vibration of the field, when other subatomic particles are interacting with it.

In theory, physicists say, proton collisions should produce pairs of W-bosons that would scatter or bounce off one another.

But according to the rules of the Standard Model, given high enough collision energies, W-boson scattering should happen more than 100 percent of the time, which is physically impossible.

So researchers have been looking for an explanation, suggesting a subatomic hand-pass, where a Higgs boson would bounce from one W-boson of a colliding pair, and be absorbed by the other.

This had been extraordinarily difficult to ascertain or prove, forcing physicists to spend years analysing data from collisions.

Incredibly, it appears they have found glimpses of the elusive W-boson scattering.

The team has seen hints of 34 W-boson scattering events, during which the Higgs boson did in fact play some role in this scattering process.

There is still too little information to work out just how attractive the Higgs boson is to W-bosons, which would show how “sticky” the Higgs field can be.

The LHC will fire once more in 2015, ramped-up to higher energies to produce 150 times more data when the giant atom-smasher was shut down in 2013.

Until then - more analysis.