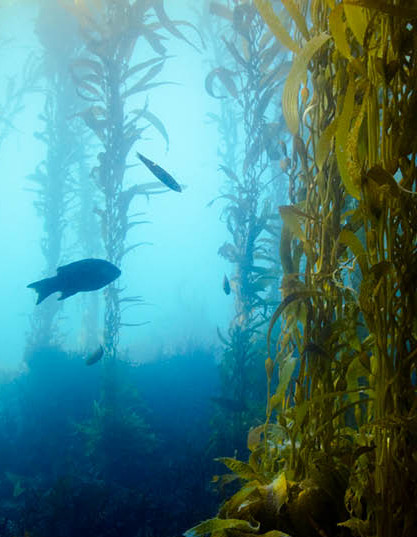 Giant kelp forests – vital marine wildernesses as important to Earth’s ecology as rainforests and coral reefs – are the target of a new international study led by experts from the University of Queensland.

“Marine kelp forests are found off 25 per cent of the planet’s coastlines,” says the project leader, University of Queensland PhD candidate Nur Arafeh-Dalmau.

“They’re one of the most productive and magnificent ecosystems on Earth, but they’re disappearing because of an increase in human activities and marine heatwaves.”

The mapped region covers thousands of kilometres along the USA and Mexico coastline and islands of the Northeast Pacific Ocean.

“We found there’s an alarmingly uneven level of protection of kelp forests inside marine reserves in the region, with less than one per cent protected off Mexico’s Baja California coast,” Mr Arafeh-Dalmau said.

“This region is subject to episodes of higher sea surface temperatures and lower availability of nutrients, limiting the kelp’s biomass and spread.

“Giant kelp is the fastest growing organism on Earth, and when we lose a forest, we’re losing incredible carbon store, habitat for marine biodiversity, breeding grounds for fish stocks and an erosion buffer for coastal communities.

“As marine heatwaves increase in frequency and severity, we need to work out how and where to best protect them.

“We’re working hard on this very problem, monitoring where kelp forests thrive over time and quantifying how much of these persistent kelp habitats are fully protected.”

The study methods will now be used worldwide to map the persistence of giant kelp and other canopy forming kelp species in countries like Chile and South Africa, and Australia and New Zealand.

Mr Arafeh-Dalmau believes one of the biggest barriers to kelp forest conservation is the lack of awareness, particularly when compared to similar ecosystems such as coral reefs.

“We need the public and policymakers to know these mysterious underwater forests exist, they’re being threatened globally by human activities, and we need to protect them now,” he said.

Co-author Dr Fiorenza Micheli from Stanford University says governments need to ensure 30 per cent of oceans are fully protected by 2030, including large portions of kelp forests.

“But other measures will be necessary including restoration of degraded kelp forests, identification of genetically resilient kelps for targeted protection and restoration, and a reduction of other anthropogenic stressors like overfishing and pollution.”