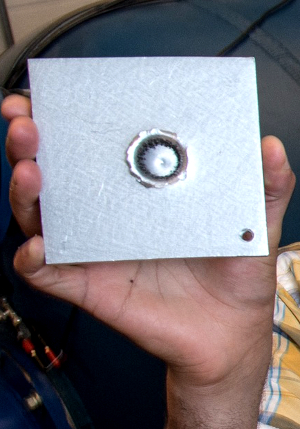 Nano-engineers keep finding new uses for ‘nanoribbons’, and a recent research project makes the tiny strips much easier to create.

Carbon nanotubes “unzipped” into graphene nanoribbons by a chemical process have found a range of experimental uses in all kinds of projects, but the method to unzip them has been cost and energy-intensive.

Now, a team from Rice University has found a remarkably simple way to get nanotubes to form into nanoribbons – smashing them into a hard surface at close to 7,000 metres per second.

The US tam discovered that nanotubes which hit their target end-first turn into mostly ragged clumps of atoms. However, nanotubes that broadside their target unzip into handy ribbons.

The ribbons can be used in composite materials for strength and applications that take advantage of their incredible electrical properties.

To make the discovery, researchers fired pellets of randomly oriented, multi-walled carbon nanotubes from a gas gun built with funding from NASA.

The gun was designed to test satellite equipment against impacts from microscopic meteorites.

Back on Earth, carbon pellets hit an aluminium target in a vacuum chamber at about 24,100 km/h.

When the team inspected the resulting carbon rubble, they found nanotubes that smashed into the target end first or at a sharp angle simply deformed into a crumpled nanotube, but tubes that hit lengthwise split into ribbons with ragged edges.

“We were investigating possible applications for carbon nanotubes in space when we got this result.”

Simulations of the impact showed that when multi-walled tubes hit the target, the outer tube flattens, hitting the inside tubes and unzipping them in turn.

Single-wall nanotubes do just the opposite; when the tube flattens, the bottom wall hits the inside of the top wall, which unzips from the middle out to the edges.

It appears that the even distribution of stress along the belly-flopping nanotube, which is many times longer than it is wide, breaks carbon bonds in a line nearly simultaneously.

More details have been published in the journal Nano Letters.