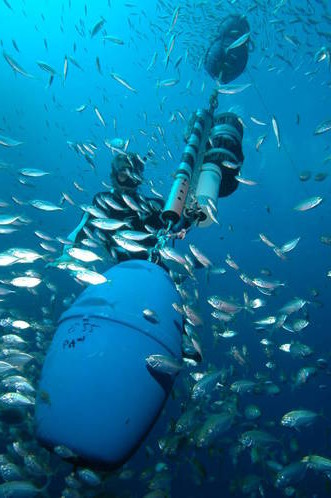 Researchers are receiving data from a giant network of acoustic sensors to find out how climate change might affect sea animal behaviour.

The devices pick up signals from tags placed on fish and marine mammals.

The IMOS Animal Tracking Facility network consists of nearly 2,000 receiving stations around the country, and has tracked 3,777 Australian sea animal.

The tracking data is validated by an advanced control algorithm developed in Hobart, which can identify background noise signals and anomalous movements to boost the quality and re-usability of the information.

Researchers say the data is helping predict how animal behaviour might change in response to warming waters.

“In the case of bull sharks – a species we tracked that is known to be potentially dangerous – research has shown that they move within warmer waters, meaning it is important that we understand how they modify their movements in response to changes in ocean conditions and processes,” IMOS Animal Tracking Facility leader Dr Rob Harcourt has told the ABC.

“We do have quite strong evidence that there are things like pulses of warm water that are coming down with the East Australian Current which is strengthening and has been strengthening over some time.

“With those water masses we find that fish are essentially staying in the same environment but that environment is actually moving.

“Over the course of the next few years we will be able to build some really complex models to allow us to predict what is going to happen as we understand more about the oceanography,” he said.

“For instance, in Sydney Harbour the New South Wales government has been tagging bull sharks because of anxiety about people being bitten,” he said.

“Our colleagues up in Townsville, which is about 2,400 kilometres away, also detected bull sharks and then discovered these were the same sharks that had been tagged in Sydney Harbour.

“We are now looking at their movements all the way up and down the coast over a number of years.”