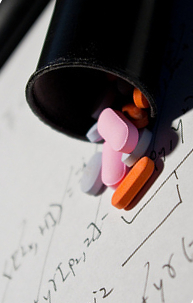 The first far-reaching study into academic doping in Australia has been conducted, finding University students are increasingly looking for a chemical advantage over their classmates.

The use of so-called “study drugs” has occurred on Australian campuses for decades, but only recently has such a comprehensive probe been undertaken. It turns out Ritalin, a psycho-stimulant normally used by people with ADHD to increase alertness and attention, is the most popular choice today.

The figures say drug use for academic advantage is even more widespread in Australian universities than it is in Germany or the United States. Among Australian students, study-enhancing drug use is most prevalent in the faculties of law and medicine.

The study was conducted with surveys of over 1700 students across several universities. Lead author Dr Jason Mazanov from the University of New South Wales says many students have got into a dangerous cycle of using ‘uppers’ to study and ‘downers’ to help them sleep between sessions.

“They go on an upper to try and improve their performance, they use a stimulant, but then they have to use a depressant like valium to bring them back down again,” Dr Mazanov said.

“So you end up in this really dangerous upper-downer cycle where people are then relying on drugs to actually bring them up to what they feel is a level of performance and then bring them down from that.”

“In fact they probably don't need either of the drugs.”

An unnamed medical student said he will take Ritalin for a big day of studying, or even an important exam. He showed not only the casual attitudes to the addictive, amphetamine-related drug, but also a solid misunderstanding of performance enhancement.

“It's not performance enhancing in the sense that it makes you smarter on the day and therefore you're getting an advantage on your competitors... It just allows you to work harder than you normally would.”

Some are less surprised by the widespread use of Ritalin, which has been criticised in the past for supposedly being readily provided to younger students with problems focusing – which may have led to widespread proliferation and acceptance.

The study has been published in the journal Performance Enhancement and Health.