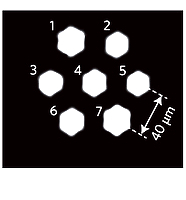 An international research team has unveiled new fibre network technology capable of transferring data at a rate of 255 terabits per second.

The mind-bogglingly fast transfer is equivalent to around 32 terabytes per second, or an incredible 2,550 times faster than the quickest single-fibre links in commercial operation.

Engineers from the Netherlands and the US have smashed the world speed record with their latest effort, using only a single strand of glass fibre.

But it is a very special strand, featuring 7 cores to maximise bandwidth.

Currently, most internet infrastructure uses single-mode cables of glass and plastic fibbers. These only carry a single mode of light, and employ a technique called wavelength division multiplexing (WDM) to push high amounts of data down the single line.

This approach is limited, as many things are, by the laws of physics.

Using spatial multiplexing, the team was able to to hit 5.1 terabits per carrier, and then applied WDM to squeeze 50 carriers down the seven cores - a total of 255Tbps.

But this was not some laboratory desktop test - the multi-mode fibre link was tested across a span of 1 kilometre.

A paper on the device has been published in Nature Photonics.