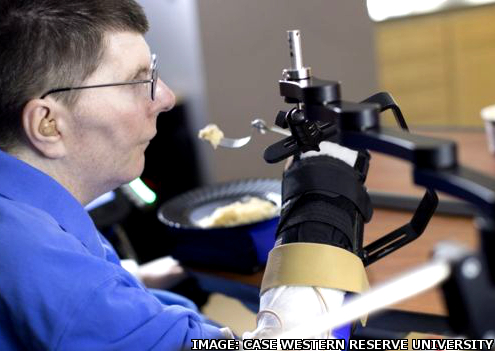 A technological link between the brain and muscles has allowed a paralysed man to feed himself.

A new paper has been published on a system that decodes brain signals and transmits them to sensors in the arm has, allowing a man paralysed from the shoulders down to regain movement in his hand and arm.

The project is the first to restore brain-controlled reaching and grasping in a person with complete paralysis.

“Our research is at an early stage, but we believe that this neuro-prosthesis could offer individuals with paralysis the possibility of regaining arm and hand functions to perform day-to-day activities, offering them greater independence,” said lead author Dr Bolu Ajiboye, Case Western Reserve University, USA.

“So far it has helped a man with tetraplegia to reach and grasp, meaning he could feed himself and drink. With further development, we believe the technology could give more accurate control, allowing a wider range of actions, which could begin to transform the lives of people living with paralysis.”

To make the breakthrough, a 53 year-old man who had been paralysed below the shoulders for eight years underwent surgery to have a neuro-prosthesis fitted.

This involved brain surgery to place sensors in the motor cortex area of his brain responsible for hand movement – creating a brain-computer interface that learnt which movements his brain signals were instructing for. This initial stage took four months and included training using a virtual reality arm.

He then underwent another procedure placing 36 muscle stimulating electrodes into his upper and lower arm, including four that helped restore finger and thumb, wrist, elbow and shoulder movements.

These were switched on 17 days after the procedure, and began stimulating the muscles for eight hours a week over 18 weeks to improve strength, movement and reduce muscle fatigue.

The researchers then wired the brain-computer interface to the electrical stimulators in his arm, using a decoder (mathematical algorithm) to translate his brain signals into commands for the electrodes in his arm.

The electrodes stimulated the muscles to produce contractions, helping the participant intuitively complete the movements he was thinking of. The system also involved an arm support to stop gravity simply pulling his arm down.

During his training, the participant described how he controlled the neuro-prosthesis: “I’m making it move without having to really concentrate hard at it. I just think ‘out’ and it just goes.”

After 12 months of having the neuro-prosthesis fitted, the participant was asked to complete day-to-day tasks, including drinking a cup of coffee and feeding himself.

He successfully drank in 11 out of 12 attempts, and it took him roughly 20-40 seconds to complete the task. When feeding himself, he did so multiple times – scooping forkfuls of food and navigating his hand to his mouth to take several bites.

At the time of the study, the participant had had the neuro-prosthesis implanted for almost two years (717 days) and in this time experienced four minor, non-serious adverse events which were treated and resolved.

“The goal is futuristic: a paralysed individual thinks about moving her arm as if her brain and muscles were not disconnected, and implanted technology seamlessly executes the desired movement… This study is groundbreaking as the first report of a person executing functional, multi-joint movements of a paralysed limb with a motor neuro-prosthesis,” says  Dr Steve Perlmutter from the University of Washington.

“However, this treatment is not nearly ready for use outside the lab. The movements were rough and slow and required continuous visual feedback, as is the case for most available brain–machine interfaces, and had restricted range due to the use of a motorised device to assist shoulder movements… Thus, the study is a proof-of-principle demonstration of what is possible, rather than a fundamental advance in neuro-prosthetic concepts or technology.

“It is an exciting demonstration nonetheless, and the future of motor neuro-prosthetics to overcome paralysis is brighter.”