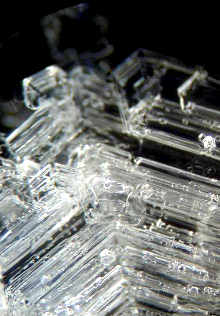 Recent developments in nanophotonics are being used by Macquarie University researchers to create a new generation of programmed crystals.

Novel nanocrystals can be set at specific colours and now have a lifetime coded in as well, so that their luminescence ends at a strategic point.

It has been possible for a while to code crystals with particular colours for different purposes, but now τ-Dots add a new layer. They can be coded in the time dimension in addition to colours, meaning their luminescence lifetimes (τ) can be engineered and assigned to a single nanoparticle.

This extra dimension offers an exponential boost in the total number of potential combinations, which can be used for multiple medical tasks or diagnoses simultaneously,” said researcher Dr Yiqing Lu.

“These nanocrystals can form combination codes, like barcodes, to form a vast library of distinguishable molecular probes, which can be used for complex diagnostics. Screening tests can more quickly and accurately identify the cause of infection, residue cancers at an early stage, and locate the specific molecular targets for targeted drug therapies. ” said fellow researcher Dr Dayong Jin.

“This toolset is really a paradigm shift for identifying rare events in high-noise environments typical in biological systems such as cancer detection, high throughput screening and also in the bio-detection domain,” said co-author of the joint study Professor J Paul Robinson.

The τ-Dots also have application in improving the storage capacity and security of data, and can invisibly mark genuine drug products as an anti-counterfeit measure, says Lu.

“Our ability to layer the τ-Dots’ lifetimes enables higher density storage than was previously possible. We can also protect the data by codifying the τ-Dots until they are essentially impossible to crack.

“By applying τ-Dots to any surface, we can leave a secret message or mark on any product, which will only be revealed by a specially designed scanner. This has huge potential in confirming the authenticity of any product, from pharmaceutical drugs to medical courier supplies.”

The full paper has been published and is accessible in Nature Photonics.