One of the greatest contributors to our current knowledge of the Southern Ocean is stepping aside to make way for a younger model.

Australia’s Marine National Facility research vessel, Southern Surveyor, is going up for sale by open tender on the international market, in the lead up to the arrival of its replacement, RV Investigator.

Southern Surveyor has helped scientists around the world investigate all conditions of the Southern Ocean, through the waters of East Timor, and deep into the Indian and Pacific Oceans.

Mr Ron Plaschke, Director of the Marine National Facility, says the research conducted on board the ship has taught incredible lessons, helping the scientific community's understanding of the global importance of seas and oceans surrounding Australia.

Among the incredible achievements made possible by the floating steel beauty are: the discovery of massive submarine volcanoes near Fiji and Samoa, indications of huge undersea mineral deposits, deployment and recovery of buoys for the Australian Tsunami Warning System, installing the Integrated Marine Observing System (IMOS) moorings for international weather and climate research, observation of ocean current and their influence on rainfall, extensive seafloor mapping and discovery of wrecked ships including the MV Limerick and HMAS Australia.

“The 42 year old Southern Surveyor is a former North Sea trawler converted into a research vessel and, while being well maintained, the ability to carry a wide range of scientific equipment and larger scientific teams is becoming increasingly limiting,” Mr Plaschke said.

“It will be a sad day when Southern Surveyor is sold and departs from Hobart, but there is growing excitement about the upcoming arrival of the replacement vessel, Investigator,” Mr Plaschke said.

The marine science community has been incredibly thankful for the Surveyor's contribution, but can barely contain its excitement at the imminent arrival of the $120 million custom designed and built cutting-edge research vessel - the Investigator. 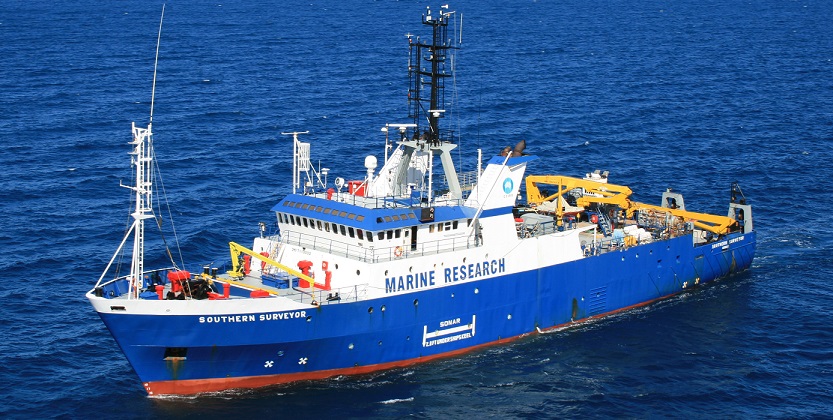