Survey indicates acting-out may be in the genes 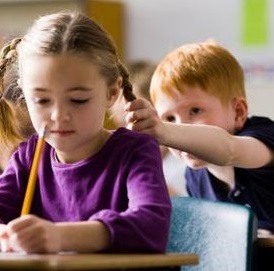 A study has suggested there may be a genetic reason for children who appear to develop behavioural problems at child care centres and preschools.

Survey-based research was undertaken in the United States to assess the claim that large centres for care and education actually create some temperament and self-control problems. Fears had been raised by parents and media reports that as class sizes grow, so does the supposed effect of generating negative behaviour.

The test was conducted to check for the likelihood of a genetic basis for certain poor self-control and temperament problems. It appears that for some children, classroom behaviours may come from their parents.

“Assuming that findings like this are replicated, we can stop worrying so much that all children will develop behaviour problems at centre-based care facilities, because it has been a concern,” said the study’s lead author Shannon Lipscomb, an assistant professor of human development and family sciences at Oregon State University.

“But some children [with the apparent genetic predisposition] may be better able to manage their behaviour in a different setting, in a home or smaller group size.”

Data was gathered in ten states of the US from 233 families with adopted children. Information was gathered from birth parents, adoptive parents and children.

Researchers found that birth parents with high rates of negative emotion and self-control - based on a self-reported temperament scale - were more likely to have children who struggled with behavioural issues such as lack of self-control and anger, in child care centres.

The influence of the adoptive parents’ temperament was factored-in, with researchers reporting a modest effect based on the genetic link theory.

“We aren’t recommending that children are genetically tested, but parents and caregivers can assess a child’s needs and help them get to a setting that might be more appropriate,” Professor Lipscomb said.

“This study helps us to explain why some children struggle so much with large peer groups and heightened social interactions. It may not be a problem with a teacher or parent, but that they are struggling on a biological level.”

The full report has been published in International Journal of Behavioral Development.