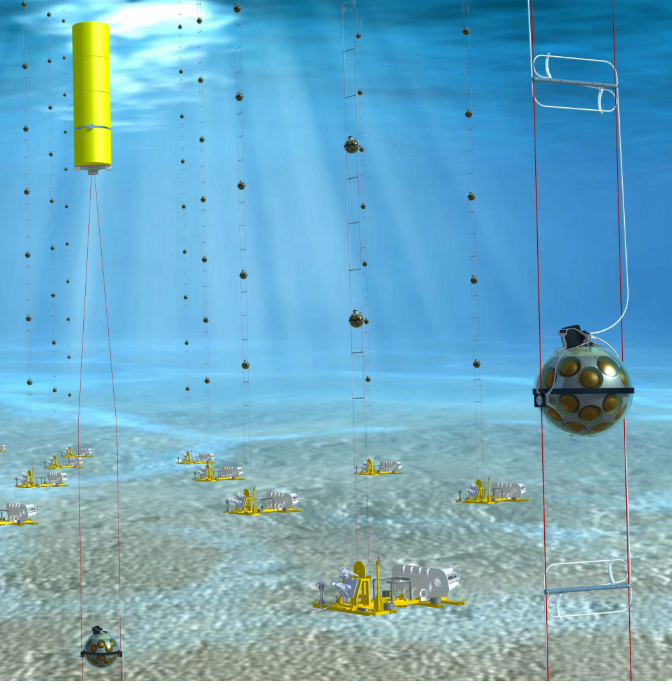 Local scientists are building a huge underwater telescope at the bottom of the Mediterranean Sea to study rays from space.

Located at two sites at depths of up to 3.5km, the KM3NeT telescope will occupy more than a cubic kilometre of water, made up of hundreds of vertical detection lines anchored to the seabed and held in place by buoys.

Dr Clancy James from Curtin University says the huge volume of water is needed to surround the instruments, because neutrinos are otherwise difficult to detect.

“Neutrinos very rarely interact, however when a neutrino hits water it generates light, which the KM3NeT telescope is able to detect,” Dr James said.

“The underwater telescope is bombarded by millions of different particles but only neutrinos can pass through the Earth to reach the detector from below so, unlike normal telescopes, it looks down through the Earth at the same sky viewed by upward-facing telescopes in Australia.”

Dr James said KM3NeT needed to be incredibly sensitive because the light detected from neutrino interactions was about as faint as the light from a lightbulb in Sydney as seen from Perth.

“Each line has 18 modules equipped with light sensors along its length and, in the darkness of the deep ocean, these sensors register the faint flashes of a special light that signals the interaction of neutrinos with the seawater,” Dr James said.

“This project will help us answer some of the major questions around particle physics and the nature of our universe, potentially ushering in a new era in neutrino astronomy.”