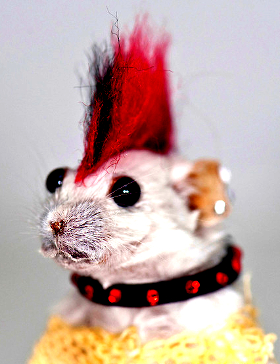 Mice with mohawks have thrown new light on the nature and development of autism in the brain.

The unusual hairstyles of a set of lab mice prompted further investigations into a particular genetic mutation, creating a tentative link between autism and two key pathways in the brain.

The revelation came after an international team of neuroscientists bred hundreds of mice with a suspect mutation already tied to autism spectrum disorders.

Mice typically groom each other's hair, and researchers noticed that almost all the grown mice had sideways or “overgroomed” hair with a stylised centre strip between their ears, but hardly a tuft elsewhere.

The NYU Langone Medical Centre team said there was an “Aha” moment, when they realised the telltale overgrooming — a repetitive motor behaviour — had been linked in other experiments in mice to autism, which prevents children from developing normal social, behavioural, cognitive, and motor skills.

The researchers point out that people with autism often exhibit noticeably dysfunctional behaviours, such as withdrawal, and repetitive movements including constant hand-flapping, or rocking.

Now and for what the researchers say is the first time, an autistic motor behaviour has been traced to specific biological pathways that are genetically determined.

The findings could potentially lead to new treatments for some autism, assuming the pathways’ effects as seen in mice are reversible.

In the study researchers knocked out production in mice of a protein called Cntnap4, which has earlier been observed as particularly prevalent in people with autism.

Both are neurotransmitters, chemical message released from one nerve cell to the next to stimulate similar sensations throughout the body.

GABA, short for gamma-aminobutyric acid, is the main inhibitory neurotransmitter in the brain. It not only helps control brain impulses, but also helps regulate muscle tone. Dopamine is a well-known hormonal stimulant, highly touted for producing soothing, pleasing sensations.

This meant that the lost protein had opposite effects on the neurotransmitters because GABA is fast acting and quickly released, so interfering with its action decreases signalling, while dopamine's signalling is longer-acting, so impairing its action increases its release.

“Our study tells us that to design better tools for treating a disease like autism, you have to get to the underlying genetic roots of its dysfunctional behaviours, whether it is overgrooming in mice or repetitive motor behaviours in humans,” said senior study investigator Gordon Fishell, PhD.

“There have been many candidate genes implicated in contributing to autism, but animal and human studies to identify their action have so far not led to any therapies. Our research suggests that reversing the disease's effects in signalling pathways like GABA and dopamine are potential treatment options.”

The study has been published in the journal Nature.