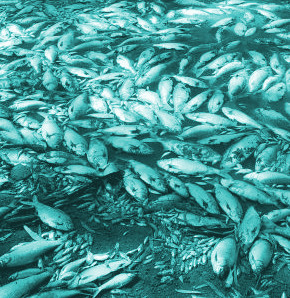 CSIRO scientists are trying to find exactly which species of blue-green algae caused the mass fish deaths in outback NSW this summer.

Water from the Menindee Lakes is being studied at the Australian National Algae Culture Collection (ANACC) in Hobart.

“When I heard about the bloom I contacted some colleagues at Water NSW and asked them [to] … send me a sample from where the bloom was greatest, and at that time it was in Lake Menindee,” said CSIRO algae expert Dr Anusuya Willis.

She has already determined that the algae is different to the blooms in the Murray-Darling River system in the 1990s.

“To look at them they're very difficult to tell apart, but molecularly their genetics can be quite different, and one of the important differences is that they can have different toxins,” Dr Willis said.

ANACC director Ian Jameson said it is important to know exactly which species is killing fish.

“If you heard there was an animal plague in the wheat belt within Australia, you'd really want to know if it was a rat plague, or a mice plague, or a locust plague,” he said.

“To us, just hearing there is a algae bloom doesn't provide much information.

“So we're critically interested in what the actual species are, and to get that, we have to get some samples.”

“If we don't know [what] the causative organisms are, and how they respond to the environment, it makes it more difficult to put in potential control measures,” he said.

The scientists have grown 30 different cultures to send to other researchers around the country.

“So if we know we have a toxic algae, we can manage for that, and perhaps prevent the blooms getting [as bad as they were] this year.”

The research into the algae could be complete within months.