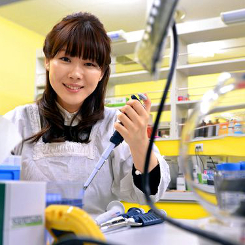 UPDATE 03/07/14 - The study described in the following article has been retracted by its publishers on the basis of errors and misconduct in the research and review processes.

A statement from science journal Nature confirmed the retraction this week, saying "multiple errors impair the credibility of the study as a whole".

"Ongoing studies are investigating this phenomenon afresh, but given the extensive nature of the errors currently found, we consider it appropriate to retract both papers," it said.

A new technique is being developed that would allow human cells to be turned back into stem cells, and grown into virtually any body part.

Not only this, but because of a recent breakthrough the process may be much faster and simpler than ever imagined.

Some Japanese researchers have created a way to turn back the clock on cells by throwing them in a chemical bath and waiting.

“It’s amazing. I would have never thought external stress could have this effect,” says Yoshiki Sasai, a stem-cell researcher at the RIKEN Centre for Developmental Biology in Kobe, Japan, and a co-author of the latest study.

The new technique involves stressing cells almost to the point of death, which forces them back to a state where they can grow into one of the myriad different varieties that make up our bodies

Three stressors were applied to force the change; a bacterial toxin that perforates the cell membrane, exposure to low pH and physical squeezing. At the end of this ordeal, the cells have been seen to take up roles throughout the body of test subject mice.

The phenomenon has been dubbed stimulus-triggered acquisition of pluripotency (STAP).

The development of STAP cells has been the result of years of gruelling work from one researcher in particular; Dr Haruko Obokata, a young stem-cell biologist.

Obokata was the first to detect the possibility that cells under extreme stress cold revert to a previous states. More than five years have passed before she has been given the recognition from her peers that the research now clearly deserves.

With heroic modesty, Dr Obokata says “there were some really hard days,” trying to change the scientific understanding of life.

Researchers have already reprogrammed many different cell types, including from the brain, skin, lungs and liver. So far it appears the method will work with most, if not all, mammal cell types.

Of key interest is the finding that STAP cells can form placental tissue. This simple discovery will likely make cloning much faster and easier, as it would allow a clone to be made without involving separate sperm, egg and fertilisation processes.

On average, Obokata says twenty-five per cent of the cells survive the stress and of those, thirty per cent convert to pluripotent cells. With previous method for making similar but less useful cells, just one per cent of attempts were successful, and took weeks.

There are many hurdles between this discovery and the ability to generate replacement limbs, organs and other body parts – however, it certainly brings the possibility a great deal closer while also opening an entirely new avenue for research and medical developments along the way.