Stealing the secrets of self determination

Nature has long held the engineering secrets to power the future, and researchers are now looking to pinch another one – the power of self-assembly.

Bioengineers are interested in copying or manipulating self-assembling systems to create useful new materials or devices.

Anything from advanced medical implants to solar cells that can be grown in place should be possible, if the experts can convince proteins to take the right shape.

Amyloid proteins, for example, can self-assemble into the tangled plaques associated with Alzheimer's disease - but similar proteins can also form very useful materials, such as spider silk, or biofilms around living cells.

Researchers in the US have published a report showing how to manipulate natural proteins so that they self-assemble into amyloid fibrils.

The paper is published online by the journal ACS Nano.

Amyloids are big proteins with lots of flat surfaces suitable, which could taken on some exciting functions.

The research team at the University of California say they could be used as “scaffolding” for tissue engineering, and potentially could be programmed so that other particles or proteins could be attached in specific locations or arrays.

Amyloids are also tough: they can withstand boiling, attack by digestive proteins and ultraviolet radiation.

Maria Peralta - a graduate student in chemistry – led a team to make the amyloid fibrils by tweaking natural "antifreeze" proteins from ryegrass and an insect; spruce budworm.

These proteins allow some plants and animals to withstand very cold temperatures by preventing the growth of ice crystals, but they do not naturally self-assemble into larger structures.

The researchers removed cap structures from the end of the antifreeze proteins. They were then able to let them self-assemble into fibrils with predictable heights, a potential new material for bioengineering. 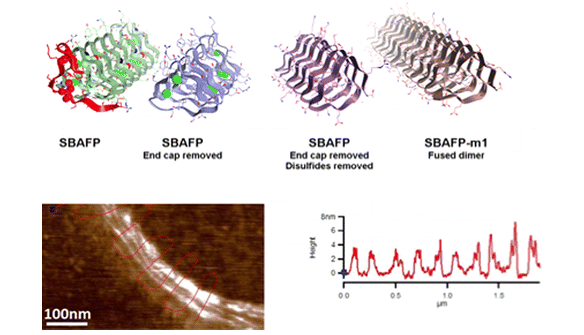