Sound builds in megahertz on nanoscale 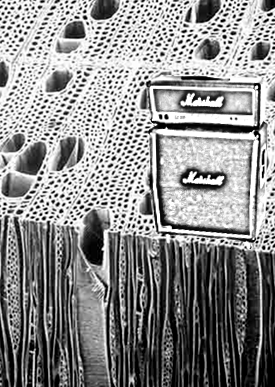 Australian researchers have put sound to work, with a new method to build micro- and nano-structures using acoustic waves.

RMIT University researchers have demonstrated that high-frequency sound waves can be used to precisely control the spread of thin film fluid along a specially-designed chip.

Thin film technology is considered the bedrock of microchip and microstructure manufacturing, so the breakthrough offers an important advance for a string of futuristic manufacturing techniques.

“By tuning the sound waves, we can create any pattern we want on the surface of a microchip,” RMIT’s Professor James Friend said.

“We've found that thin film liquid either flows towards or away from high-frequency sound waves, depending on its thickness.

“We not only discovered this phenomenon but have also unravelled the complex physics behind the process, enabling us to precisely control and direct the application of thin film liquid at a micro and nano-scale,” he said.

They call their new technique “acoustowetting”.

More information is available either in the video embedded below or in the research paper on the project; Double Flow Reversal in Thin Liquid Films Driven by MHz Order Surface Vibration.