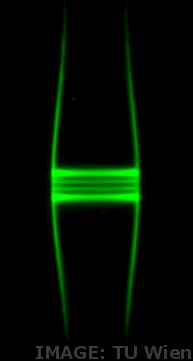 Queensland researchers have taken another small step on the path to quantum computing.

A team from Griffith University and the University of Queensland have simplified a complex quantum logic operation using a high-tech circuit – the quantum Fredkin gate – for the first time.

“Much like our everyday computer, the brains of a quantum computer consist of chains of logic gates, although quantum logic gates harness quantum phenomena,” explains Dr Raj Patel from Griffith’s Centre for Quantum Dynamics.

“Similar to building a huge wall out lots of small bricks, large quantum circuits require very many logic gates to function. However, if larger bricks are used the same wall could be built with far fewer bricks,” said Dr Patel.

“We demonstrate in our experiment how one can build larger quantum circuits in a more direct way without using small logic gates.”

The team was looking at one particular way to integrate a useful amount of these gates into circuits, using what is known as a Fredkin (controlled- SWAP) gate. This is a gate where two qubits – the quantum equivalent of traditional ‘bits’ - are swapped depending on the value of the third.

Usually, a Fredkin gate requires implementing a circuit of five logic operations, but the Queensland research team used the quantum entanglement of photons – particles of light – to implement the controlled-SWAP operation directly.

“There are quantum computing algorithms, such as Shor's algorithm for factorising prime numbers, that require the controlled-SWAP operation,” says Professor Tim Ralph from the University of Queensland.

“The quantum Fredkin gate can also be used to perform a direct comparison of two sets of qubits to determine whether they are the same or not. This is not only useful in computing but is an essential feature of some secure quantum communication protocols where the goal is to verify that two strings, or digital signatures, are the same.”

“What is exciting about our scheme is that it is not limited to just controlling whether qubits are swapped, but can be applied to a variety of different operations opening up ways to control larger circuits efficiently,” said Professor Geoff Pryde, from Griffith’s Centre for Quantum Dynamics, the project’s chief investigator.

“This could unleash applications that have so far been out of reach.”

The team is part of the Australian Research Council’s Centre for Quantum Computation and Communication Technology, which uses Australia’s strong expertise in developing quantum information technologies to usher in the future of computing.

The research has been published in Science Advances.