Shots of shining sun for the heart, warnings for the skin 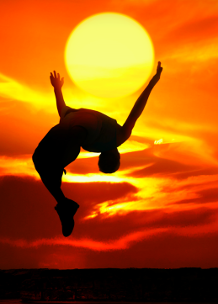 Research has suggested there may be a fun new way to fight against one of the world’s leading causes of death.

Studies have shown small doses of sunlight sets off natural store of nitric oxide in the skin, which dilates small blood vessels and may significantly lower blood pressure.

It appears short bursts of sunlight are effective in triggering a natural process, but authorities are quick to warn it would not take long in the sun for negative consequences to begin.

The nitric oxide phenomenon has been linked with UV-A rays and not UV-B, the latter of which is known to stimulate the body’s production of vitamin D.

“We found when we exposed skin to UV light on one side of the body in amounts that would correspond to roughly half an hour of sunshine during summer in southern Europe, that we find a lower blood pressure,” said Professor Martin Feelisch from the University of Southampton.

“Something in the upper layer of the skin can be released by light into the circulation to also affect blood pressure... independent of vitamin D,” he said.

“While we appreciate that excess sunlight carries a very real risk to develop skin cancer, too little may increase the risk for cardiovascular disease by elevating blood pressure.”

From a local perspective, Heart Foundation national director Dr Robert Grenfell says 10 to 20 minutes of sunlight is more than enough for the majority of Australians.

“We have far too much sun exposure over the whole year,” he told the ABC.

“Unfortunately a lot of our northern American and European dwellers don't actually get enough sunlight and so, for them, this is an important message.

“For the average Australian, we really should be limiting our exposure to sunlight to decrease our chances of skin cancer,” he said.

The study appears in a paper published by the Journal of Investigative Dermatology.