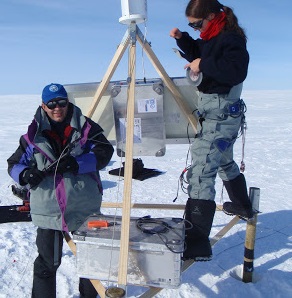 Gravitational shifts have indicated something strange is happening in Antarctica, and a team of researchers from ANU are on their way to check it out.

A mysterious clue was given up recently by the GRACE (Gravity Recovery and Climate Experiment) satellite, which measured an increase in mass in the area known as Enderby Land, between Australia’s Mawson and Japan’s Syowa stations.

Land mass increases could mean a lot of things, so a team is going down to try to work it out. There could be implications for numerous climate models based on the height and mass of Antarctica.

“Typically we see these changes in gravity in Antarctica with ice loss or accumulation, post glacial-rebound, or a combination of both,“ says Dr Lydie Lescarmontier, who will work with PhD student Bianca Kallenberg to unravel the mystery.

It will be no weekend jaunt down to the snow, with researchers shipping over on the ice breaker Aurora Australis to Davis Station, before flying to Mawson station, then on to Enderby Land.

Once on-site, the team will put up two autonomous solar-powered GPS observing rigs. The devices will measure changes in the level of the rock surface under the ice, gathering figures as precise as a millimetre a year.

“Satellites like GRACE only measure the change in mass but can’t tell you where that change comes from. These GPS will measure the Earth’s crust,” says Kallenberg.

“We already have records from the first site from 2007/08 so we want to see the difference between these dates and today,” says Lescarmontier.

“The second site is a new site so we don’t know what to expect.”

The measurements will hopefully shed some light on the relationship between satellite and ground figures, as well as what is causing the ground level to change; it could be snowfall, long-term uplift, or some other element.

Whatever is making the mysterious measurements needs to be tracked down. The height of land in Antarctica is the basis for many climate models, and must be calculated with extreme precision.

Reports from Lescarmontier and Kallenberg’s Antarctic adventure will be posted on their Enderby Land Project blog.