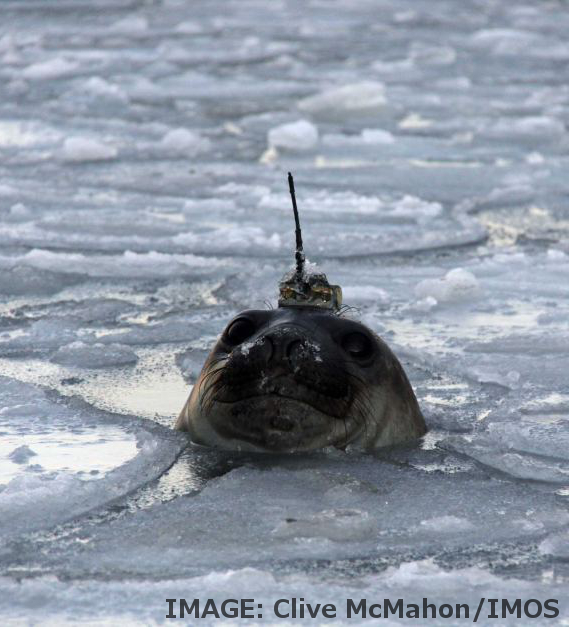 Scientists at Prydz Bay near Davis Station gluing sensors to the head of seals that can collect and transmit information on their location as well as water temperature and salinity.

The seals routinely access areas that would be tricky for human probes, so the data they gather has been some of the most useful yet.

To attach the sensors, a bag is placed over the animal's head to help calm it before it is anaesthetised.

The sensor is then glued on with a substance that that researchers say does not irritate the animal.

Studies on seals with the device on their head have shown they do not grow differently (suggesting they do not affect the animals’ ability to hunt and eat), and they have not been observed trying to scratch the instrument or remove it from their heads.

They are able to measure location, temperature, depth and salinity as the seal swims and dive to depths of more than 2 kilometres.

The data is beamed back to the Integrated Marine Observing System (IMOS) in Hobart via satellite, to help improve our understanding of ocean currents and where they are formed, as well as seals’ behaviour patterns.

“It ends up at the Australian Ocean Data Network, which is a facility within the Integrated Marine Operating Systems program, and that data is available to the global community essentially in real time or within a day or two, so it is quite an incredible feat for a large program to make data freely available to be used in ocean modelling, animal studies and I guess just general oceanographic work,” said IMOS researcher Dr Clive McMahon.

The team at Davis Station has attached sensors to six elephant seals this summer, bringing the total number of polar animals with the instruments on their heads to 300.