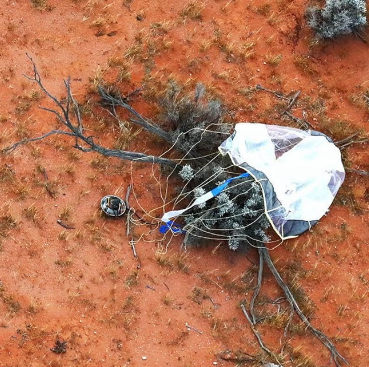 A Japanese space capsule has landed in outback South Australia, packed with samples from a distant asteroid.

After a six-year mission travelling more than 5.2 billion kilometres, samples have been delivered back to Earth which may provide clues about the origin of the solar system and life on our planet.

The capsule was dropped by a spacecraft dubbed ‘Hayabusa2’, which is now on its way to visit more asteroids.

Curtin University’s Desert Fireball Network had its cameras trained on the fiery descent of the capsule to help pinpoint the landing site as quickly as possible.

A radio beacon in the capsule, as well as its radar-reflective parachute deployed at 10km altitude, also facilitated the recovery.

Down on Earth, researchers are eagerly awaiting details of the first ever sub-surface sample to be recovered from an asteroid in space.

ANU space rock expert Professor Trevor Ireland, who is on the Hayabusa2 science team, will analyse the samples in the lab.

“I anticipate that the Hayabusa2 samples of asteroid Ryugu will be very similar to the meteorite that fell in Australia near Murchison, Victoria, more than 50 years ago,” Professor Ireland, from the ANU Research School of Earth Sciences, said.

“The Murchison meteorite opened a window on the origin of organics on Earth because these rocks were found to contain simple amino acids as well as abundant water."”

Professor Ireland said his work would help answer big questions about the diamond-shaped asteroid, which is about one kilometre in diameter and in an orbit that takes it between Earth and Mars.

“We will examine whether Ryugu is a potential source of organic matter and water on Earth when the solar system was forming and whether these still remain intact on the asteroid,” he said.

“This C-type asteroid, which is the most common kind, appears to be similar to the Murchison meteorites - rare carbonaceous chondrites packed with organic molecules and water.

“We will also discover the history of this curious looking asteroid. The other rubble-pileasteroid Itokawa is quite young. Will Ryugu prove to be a lot older?”

Meanwhile, the mission in space continues.

“While this is a great achievement by the Japanese space agency, Australia can also be proud of the important role it has played in the mission’s success.

“To get to asteroid Ryugu and return home safely, Hayabusa2 was able to use the navigation, command, control and telemetry services provided by NASA’s Canberra Deep Space Communication Complex and the European Space Agency’s New Norcia station, both managed by CSIRO, Australia’s national science agency.”

The significance of the Hayabusa2 mission will be more fully understood when an analysis is undertaken of the samples brought back from the Ryugu asteroid.