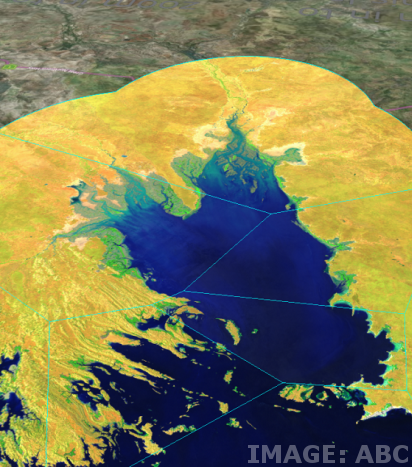 Australian scientists have revealed how radar satellites can improve the ability to detect, monitor, prepare for and withstand natural disasters in Australia including bushfires, floods and earthquakes.

“What makes SAR so valuable is that it provides all-weather and night-and-day capability to remotely monitor the Earth’s surface, unlike traditional optical Earth Observation (EO) imagery which is at the mercy of cloud, fog, rainfall and smoke,” Dr Parker said.

“SAR data can be used to precisely map topography, track movements of the ground surface, characterize land-use change, and map damage to infrastructure, all of which can significantly improve how we track and respond to natural disasters.

“But despite SAR satellites being well-documented as a hazard monitoring tool, the uptake of such data varies, and in Australia the use of SAR data has been limited.”

The research applied SAR data to nine case studies covering critical issues such as bushfires, floods and earthquakes to assess the power of SAR as a disaster mitigation and prevention tool.

“For example we looked at the 2016 Wildman Coastal Plains Floods in the Northern Territory and found that SAR has added benefits in mapping flood patterns and floodplain dynamics,” Dr Parker said.

She said these benefits can also be applied to maintaining mine site safety and better understanding seismic hazards and activity.

“Globally, Australia is one of the largest users of Earth observation data derived from satellites, which contributes to national hazard monitoring and response and more than 100 state and federal government programs. Our research shows SAR data can effectively complement this.” Dr Parker said.

“Previously SAR data has been considered too expensive to use as a tool for hazard mitigation, but our findings show, through Sentinel-1 we now have economically viable wall-to-wall, consistent sensor imaging of Australia.

“The uptake of SAR data for hazard applications globally will continue to benefit from validated case studies such as ours, the development of tools that support operational use, and the continued provision of open-access imagery by large-scale satellite missions.”