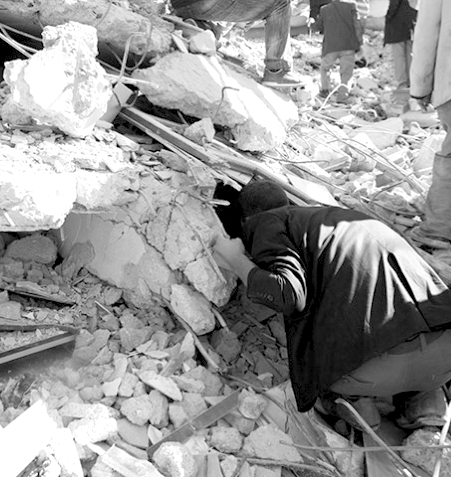 Iraqi students Laith Al-Shimaysawee and Ali Al-Dabbagh are studying at Flinders on Iraqi Government scholarships, and have developed new technology that could be used for rescue operations in workplace incidents, disasters and war zones.

The development consists of an advanced algorithm, which when combined with thermal and colour cameras, should provide a faster way of finding people than any other technique.

Rescue efforts are becoming increasingly roboticised, but even the top ‘bots are not very good at detecting people.

Existing algorithms tend to “train” their systems to use only one camera, the same that they use for detection.

In the new Flinders system, the samples (images of body shapes and poses used to compare against and detect real life casualties) remain independent of the camera in use.

This makes it versatile enough to be used with many existing rescue assist robots, and could even be applied to a helmet or hand-held device.

The number of samples used is much smaller than other systems too, so it is extremely fast in comparison, as it require less processing and image comparison.

Mr Al-Dabbagh said that while some systems use up to 1000 samples, the new technique requires only eight.

The students’ research supervisor, Dr Nasser Asgari, said that the technology can be fitted to rescue assist robots to search for trapped people in collapsed buildings or unstable structures.

It could also be used with military robots to increase vision for soldiers to identify the wounded in battlefield scenarios.

“You could put it on a robot, a hand-held device, or in a helmet be worn by rescue team workers or even rescue dogs, so that emergency workers can detect survivors faster, or to help soldiers to detect people in a battlefield,” Dr Asgari said.

The Flinders system has detected people up to 50 metres away using thermal cameras, and up to 30 metres with colour cameras.

Research reports will be released at an international robotics conference in Dubai next month.