Rock finding sets back the clock on Earth, oceans and life 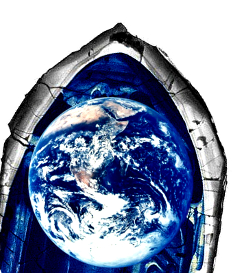 The oldest piece of the Earth’s crust ever seen has been uncovered in Western Australia.

A zircon crystal was found in the Jack Hills region on the west coast that dates back 4.4 billion years.

The crystal is a remnant of the early Earth’s first crust, which the finding shows hardened not long after the planet was formed.

The previous record for the oldest known rocks between 3.8 and 4.28 billion years old, discovered in Canada’s Nuvvuagittuq greenstone belt.

The revelations go further still, with the formation of the zircon’s oxygen isotopic composition indicating there was already water on the surface of the Earth at the time.

For such an important discovery the rock does not consist of much, it measures just 200 by 400 microns - about twice the diameter of a human hair.

The finding sheds new light, and new confusion, on the age of the Earth.

It shows either that the crust of the planet formed within 150 million years of the molten mass accumulating, or that the formation took place even earlier than previously understood.

Geologist John Valley said the exciting finding lent some weight to the “cool early Earth” theory which asserts that the planetary conditions, and the existence of life itself, may have been possible not long after the Earth was formed.

“One of the things that we're really interested in is: when did the Earth first become habitable for life? When did it cool off enough that life might have emerged?”