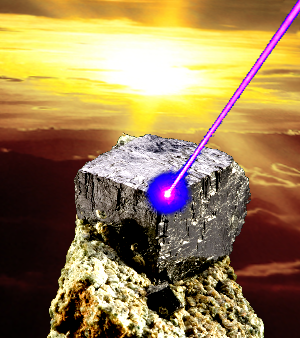 Engineers in Singapore have taken glow-in-the-dark to a futuristic degree, creating a material which can both capture and emit light.

The exciting new solar cell has been developed from Perovskite, a material that could help create high-efficiency, inexpensive solar cells with its ability to convert light and electricity both ways.

The cells glow when electricity passes through them, and they can be customised to emit different colours as well.

Researchers say entire buildings could be turned into a combination of power generator and stunning visual display.

The Perovskite material, which has patents pending, is around five times cheaper than equivalent silicon-based cells. This is due to its easy solution-based manufacturing process, which involves combining chemicals at room temperature.

The discovery was made almost by accident, when one Nanyang Technological University (NTU) researcher asked his colleague to shine a laser on the new hybrid Perovskite solar cell material they were developing.

The Perovskite cell glowed brightly when a laser beam hit it, a significant finding given most solar cell materials are meant to absorb light, not to generate it.

“What we have discovered is that because it is a high quality material, and very durable under light exposure, it can capture light particles and convert them to electricity, or vice versa,” said Asst Prof Sum, a Singaporean scientist at NTU’s School of Physical and Mathematical Sciences (SPMS).

“By tuning the composition of the material, we can make it emit a wide range of colours, which also makes it suitable as a light emitting device, such as flat screen displays.”

“What we have now is a solar cell material that can be made semi-translucent. It can be used as tinted glass to replace current windows, yet it is able to generate electricity from sunlight,” said fellow researcher Professor Nripan Mathews.

“Such a versatile yet low-cost material would be a boon for green buildings. Since we are already working on the scaling up of these materials for large-scale solar cells, it is pretty straightforward to modify the procedures to fabricate light emitting devices as well.”

The material could also lead to new development in laser technology

“Significantly, the ability of this material to lase has implications for on-chip electronic devices that source, detect and control light,” Dr Mathews added.

The latest discoveries appear in a report published by the journal Nature Materials.