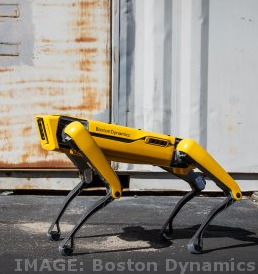 Spot is the company’s impressive and flexible quadrupedal robotics platform, designed to navigate a variety of environments and interact with many everyday objects and obstacles.

“We’re putting Spots out into the wild as we speak,” Boston Dynamics VP of business development Michael Perry told reporters this week.

“Last month we started delivering robots to customers, as part of an early adopter program. The question we’re posing to these early customers is ‘what do you think spot can do for you that’s valuable?’ We had some initial ideas, but it’s all our thinking and the hope is that this program will enable a whole new set of use cases.”

The cost is expected to run well into the tens of thousands of dollars.

“The general guidance is that the entire early adopter program is going to be about the price of a car, but how nice of a car depends on a lot,” Mr Perry said.

The system is offered as a bare-bones platform onto which owners can integrate their own sensing and interaction technology, while others come as a fully functional robot that can be added into an existing automation workflow.

“We’re now at a phase where we don’t have to send out 12 engineers with the robot,” Mr Perry said.

“Say a customer wants to operate it close to people — it needs to detect people and change its behaviour. That’s totally possible. We can actually leave it with them, give them access to our GitHub repo, and say ‘have at it.’ But if someone says they just want it built into the robot… We want people to have realistic expectations about what it can do.”

Boston Dynamics’ ad for the Spot platform can be seen below, as is new footage of Atlas.