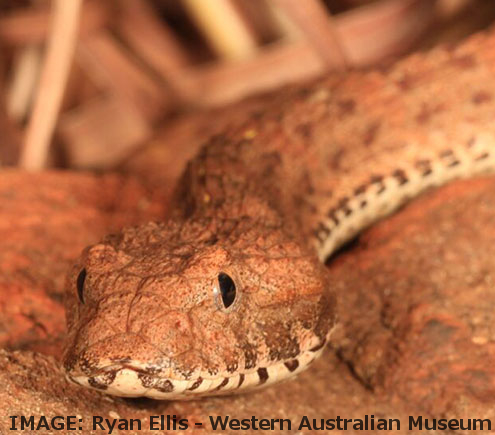 Scientists have discovered a new species of highly-venomous snake and unsurprisingly, it lives in Australia.

The newly-discovered species lives in the Kimberley region of north Western Australia.

The snake is about 60 cm long, has a diamond-shaped head, and has been dubbed the Kimberley death adder (Acanthophis cryptamydros).

It is a patient predator that sits and waits until it can ambush passing frogs, lizards or small mammals.

The species is described in a new paper in the journal Zootaxa.

Maddock and co-authors spotted the Kimberley death adder during a project looking at the genetics and ecological characteristics of snakes living in the Kimberley region.

They say the species’ range extends from Wotjulum in the west, to Halls Creek in the south, and Kununurra in the east.

It also appears on offshore islands including Koolan, Bigge, Boongaree, Wulalam, and an unnamed island in Talbot Bay.

“It’s not clear how many Kimberley death adders there are in the wild, but they’re probably quite rare,” Maddock said.

“And given the number of new species found in Kimberley recently – including frogs, lizards and many plants – it’s likely to be just one of many currently undescribed snakes in the west of Australia.”