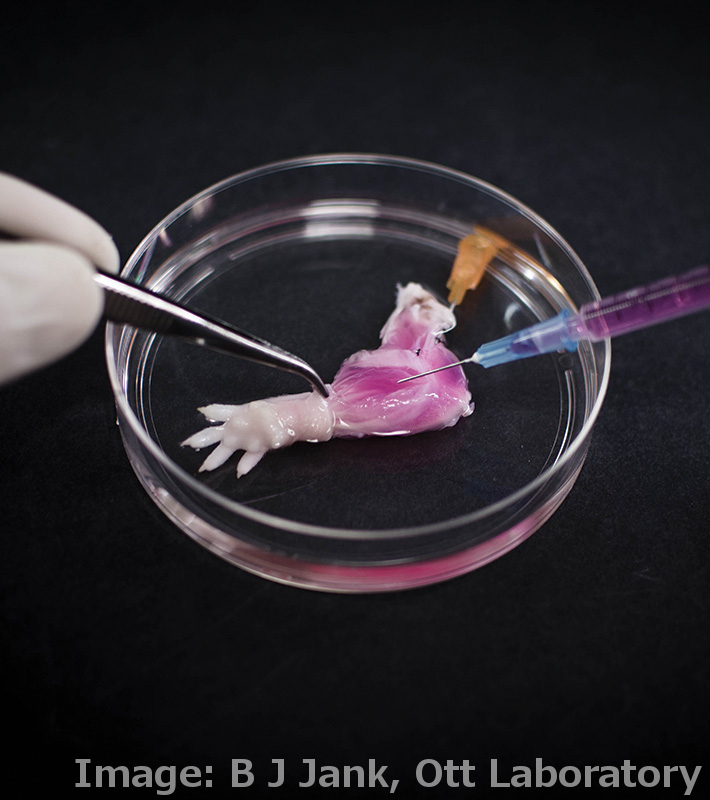 Researchers have grown a complete, live, functioning limb in the lab.

In what could be the first step toward creating replacement limbs for amputees, US researchers have grown an entire rat forelimb from living cells.

“We're focusing on the forearm and hand to use it as a model system and proof of principle,” Harald Ott of Massachusetts General Hospital in Boston, where the limb was grown, told the BBC.

“But the techniques would apply equally to legs, arms and other extremities.”

While the medical world has made great progress in bionic replacement limbs and even transplants, the team is looking for an even more advanced method.

A so-called ‘biolimb’ avoids several previous obstacles as it is made of cells from the recipient, so would not need immunosuppression therapy, and should also look and behave naturally.

The technique used to create the rat forelimb is called ‘decel/recel’, and has been used in recent groundbreaking projects to grow hearts, lungs, kidneys and other organs in the lab.

It first involves the ‘decel’ step - short for decellularisation – where organs from dead donors are stripped of their soft tissue, leaving a simple ‘scaffold’ of the organ made of the inert protein collagen.

The scaffold retains the intricate architecture of the original organ, which in the case of the rat forearm included the structures that make up blood vessels, tendons, muscles and bones.

In the ‘recel’ step, the flesh of the organ is recellularised with relevant cells from the recipient.

The re-composed scaffold is then placed in a bioreactor for nourishment, so that new tissue can grow and fill out the scaffold.

None of the donor's original soft tissue remains, so the new organ cannot be recognised as foreign and rejected by the immune system.

But a forearm is much more complex than some of the body parts grown before, due to the amount of different cell types that are needed.

It meant that the team had to go through different stages to ensure the whole arm came together properly.

They began by suspending the decellularised limb in a bioreactor, and attaching the collagen artery to an artificial circulatory system that provided nutrients, oxygen and electrical stimulation.

They then injected human endothelial cells into the collagen structures of blood vessels, so that the vessels’ surfaces could be recolonised.

This made the vessels more robust, so they would not rupture as fluids circulated.

Next, they injected a mixture of cells from mice including myoblasts; cells that grow into muscle.

This compound filled cavities of the scaffold normally occupied by muscle, and in just three weeks, blood vessels and muscles had taken their places.

The limb was then coated with skin grafts.

The team used electrical pulses to test if the limb actually worked.

They found they could activate the muscles to cause the rat's paw to flex, clench and unclench.

They also attached the new limbs to anaesthetised healthy rats, and observed blood from the rat circulating in the new limb.

But there is much more to do to, and the team are now focused on seeding the limbs with bone, cartilage and other cells, before even attempting to find out if a nervous system will develop.

At the same time, the researchers are moving along the biological tree in order to test the technique on an animal closer to humans.

They have successfully decellularised a primate arm and recolonising the scaffolds with human cells.

The team has also started experiments using human myoblasts in rats instead of one from mice.

However, it is still very early days, and incredible amounts of work will be needed in the years before the first biolimbs are ready for human testing, the experts say.

“It's a notable step forward, and based on sound science, but there are some technical challenges that Harald's group has to tackle,” researcher Steve Badylak of the University of Pittsburgh in Pennsylvania told reporters.

“Of these, the circulation is probably the biggest challenge, and making sure even the tiniest capillaries are successfully lined with endothelial cells so that they don't collapse and cause clots,” he said. .

“But this is really an engineering approach, taking known fundamental principles of biology and applying them as an engineer would.”