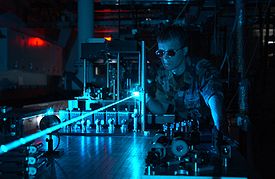 Diamonds could be the key to future communication security.

Scientists are using diamonds to generate encoded light pulses that behave in a way that cannot be predicted.

Truly random numbers are a vital resource used by cryptographers and digital security experts to secure communications in critical industries such as banking and finance.

The problem is that most events we consider random; like the flip of a coin or the spin of a roulette wheel, only appear random because we lack information to predict the outcome. Quantum processes, on the other hand, are guaranteed by the laws of physics to be genuinely random – no information exists until the event we want to predict has already taken place.

Using this idea of genuine randomness, the researchers designed a diamond laser system where each laser-light pulse generated has a polarisation direction determined by the quantum motion of the carbon atoms in the diamond lattice – the arrangement of carbon atoms and their bonds.

In a new paper, researchers show that diamond, when configured as a laser, is able to generate a random polarisation state directly from the quantum motion of the carbon atoms in the diamond lattice. This motion arises from quantum vibrations of the atomic lattice, which are inherently random and therefore impossible to predict.

“This is an entirely new tool for producing quantum randomness” says Dr Doug Little, the lead researcher on the project.

“We are hoping this type of device will provide end-users in fields such as encryption and quantum simulation with a new option for simplifying and enhancing their technology.”

“A fascinating aspect of this laser is that the degree of randomness can be tuned by tweaking the orientation of the diamond. In future, this will allow us to study the transition from quantum randomness to classical determinism in a systematic manner; which could have implications that go beyond lasers and their applications.”

The paper is accessible here.