Radio hunt brings black holes to the back yard 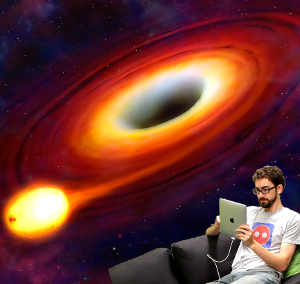 A new weapon has been added to the citizen scientist’s arsenal, with the launch of a tool that allows anyone to find black holes in deep space from the comfort of an armchair.

Everyone from retired footballers to mild-mannered accountants can now be an intrepid cosmic explorer, delving deep into the reaches of the universe to detect the swirling vortices of mystery.

‘Radio Galaxy Zoo’ has launched as part of the broader ‘Zooniverse’ movement, which runs a range of citizen-science projects covering everything from galaxy shapes to cancer data and whale songs.

Radio Galaxy Zoo users match galactic images with radio images from CSIRO’s Australia Telescope, in an effort to work out if a given galaxy has a supermassive black hole within it.

“It takes about a minute to learn what to do,” said CSIRO’s Dr Julie Banfield, an Australian coordinator for the international project.

“Then to actually work with the images takes only a few seconds each — perhaps a couple of minutes for the really tough ones.

“You just need match up a couple of pictures and look for what you think is the galaxy at their centre.”

It is a sign of the new level of democratic science made possible through technology.

“Galaxy Zoo and the other projects have been producing real science, science that gets published,” said CSIRO’s Dr Ivy Wong, who has also been working to set up Radio Galaxy Zoo.

“Everyone, literally everyone, can now help to make discoveries.”