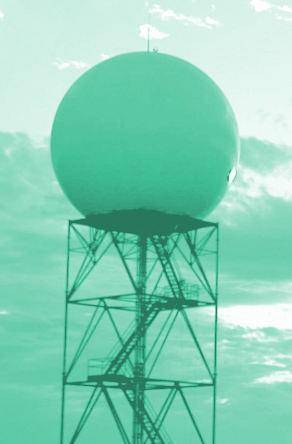 Scientists have used a weather radar to peer inside cells.

Doppler radar is typically used to peek inside air masses to predict the weather.

However, researchers in the US are now using similar technology to look inside living cells, introducing a method to detect pathogens and treat infections in ways that scientists never have before.

In a new study, a team from Purdue university has used Doppler to look inside cells and track their metabolic activity in real time, without having to wait for cultures to grow.

Using this ability, the researchers can test microbes found in food, water, and other environments to see if they are pathogens, or help them identify the right medicine to treat antibiotic-resistant bacteria.

They exposed the cells to different known pathogens, in this case salmonella and E. coli. They then used the Doppler effect to spy out how the cells reacted.

These living cells are called “sentinels,” and observing their reactions is called a biodynamic assay.

The experts say their strategy is broadly applicable whenever scientists have isolated an unknown microbe and want to know if it is harmful to living tissues or not. Such cells may show up in food supply, water sources or even in recently melted glaciers.

Being able to quickly discern whether a cell is harmful is incredibly helpful in situations where people encounter a living unknown microorganism, allowing scientists to know what precautions to take.

Once it is known that a microbe is harmful, they can begin established protocols that allow them to determine the specific identity of the cell and determine an effective antibiotic against the microorganism.

Another benefit is the ability to quickly and directly diagnose which bacteria respond to which antibiotics.

The scientists say their next steps will include investigating viral sepsis.

Culturing the patient’s tissues and homing in on the correct antibiotic to use can take time the patient does not have, usually eight to 10 hours.

This new biodynamic process allows scientists to put the patient’s bacterial samples in an array of tiny petri dishes containing the tissue sentinels and treat each sample with a different antibiotic.

Using Doppler, they can quickly notice which bacterial samples have dramatic metabolic changes. The samples that do are the ones that have reacted to the antibiotic — the bacteria are dying, being defeated and beaten back by antibiotics.

In less than half the time a traditional culture and diagnosis takes, doctors could tell which antibiotic to administer, bolstering the patient’s chances for recovery.