Race kicks off at the speed of Sun


Years of work, millions of dollars but only a few kilograms of weight will be shooting down the highway from Darwin this weekend, with the start of the 3000 km World Solar Challenge race.

Teams from 23 countries have converged on the sun-drenched track again this year, gathering before dawn to soak up as many golden drops as they can. Many perennial favourites have returned for this year’s race, but it has also been expanded to allow a myriad of exciting and novel entrants.

Big guns, or rays, Nuon from the Netherlands and Tokai from Japan will be in the ‘challenger class’; a sheer race to the end. Other classes allow more liberal use of technologies to encourage style, practicality and other factors.

This year is the first year for the ‘Cruiser Class’, wherein entrants must meet the road regulations of their home countries and seat at least two people.

The new classes show a shift towards mainstream design and applications. The push is seen both as an example of the current and improving state of solar technologies, and of the general public’s interest in non-combustible energy systems.

The University of New South Wales will line up for the race, as will TAFE South Australia. One of the the biggest hits of the lead up to the race has been the Dutch entrant in the cruiser class, the Eindhoven team’s car - Stella.

Stella is the world’s first four-seat solar car, though it looks slightly more like a bus, or shoebox, or doorstop, than a car.

Some new rules required a massive redesign for some teams, including the Cruiser Class stipulation that cars must have four wheels. Previously many had got by with just three, but now must deal with the extra weight and fuel requirements of a fourth.

The Challenger Class team from Cambridge may have sacrificed too much to get their car down to its tiny size; they have lost control and crashed twice during test drives.

The race in 2011 was interrupted by bushfires in the centre of the country, it is hoped that this year’s event will be run under clear skies from Darwin to Adelaide. Theoretically, winners will begin to roll into the final city some time on Thursday. 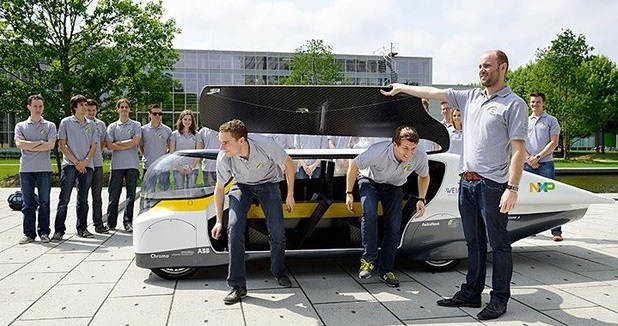