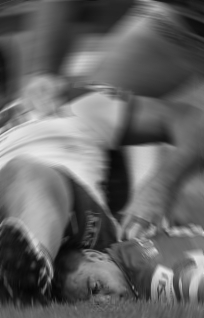 The US Department of Defence is funding a concussion study in Queensland.

A US$250,000 grant has been awarded to QUT’s Genomics Research Centre, looking at whether genetic variations are involved in the post-traumatic headache experienced by some people following concussion.

Leader in migraine genetics research, Professor Lyn Griffiths, said that headaches are a common symptom following head trauma that also causes concussion. This can be a significant healthcare burden and drastically affect quality of life.

“While most people have acute and relatively short-lived effects, in some cases symptoms are known to persist for weeks or months, and sometimes years.

“This results in a diagnosis of post-concussion syndrome, which can cause some people to retire from contact sports for the sake of their health.

“Post-concussion syndrome as a whole is not well understood, and we don’t know why some people suffer prolonged symptoms such as severe and persistent headaches and others don’t.

“We think that genetic variation may play a role, so the aim of this study is to look at a range of genes focusing in particular on those involved in nerve function.”

Professor Griffiths said after a traumatic brain injury there is a cascade of events that impact the health of neurons in the central nervous system.

“These events involve ion channels in cell membranes which control the flow of chemical ions, such as calcium, sodium and potassium. Ion channels are an important target for treating a number of medical conditions,” she said.

“Research has already shown that mutations in one particular calcium ion channel gene can cause a severe type of migraine that runs in families. For people with a specific mutation in this gene, even a minor head bump can lead to very severe post-concussion symptoms.

“So we are focusing on whether this and other ion channel genes play a role in the way an individual reacts to concussion and whether they experience post-concussion headache and migraine.”

More information about the study can be found here.