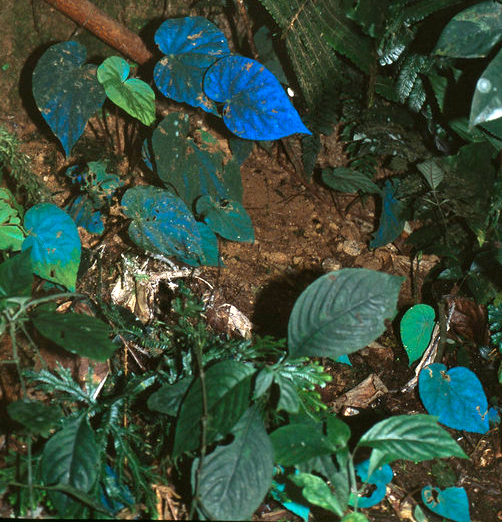 Some plants use a quirk of quantum physics to squeeze more energy out of the Sun.

New research has found that shade-dwelling plants can adapt to the extremely low-light conditions of their environment by using iridescent blue leaves to enhance photosynthesis.

The study of Begonia pavonine - which is found under the thick canopies of tropical forests in Malaysia - revealed that it has iridescent blue leaves due to unusual chloroplasts, known as iridoplasts, in its surface layers.

Chloroplasts harvest sunlight and convert it into chemical energy for the plant, with light initially absorbed by membranes — called thylakoids — that assemble into large, variably sized stacks.

Deep investigations of the B. pavonina iridoplasts using light and electron microscopy have found that their internal structure is highly irregular compared to conventional chloroplasts.

The iridoplasts contain regularly spaced stacks of three to four thylakoids that resemble a photonic crystal.

This structure strongly reflect wavelengths of light between 430 and 560 nanometres, creating the leaves’ blue iridescence.

In the Malaysian forests, the small amount of light that reaches the plant’s leaves is mainly at the green-red end of the spectrum.

Researchers on the new report say that the iridoplasts concentrate these specific wavelengths onto the plant’s photosynthetic organs, increasing the efficiency of its photosynthesis by 5–10 per cent.

More details are available in the full report, here.