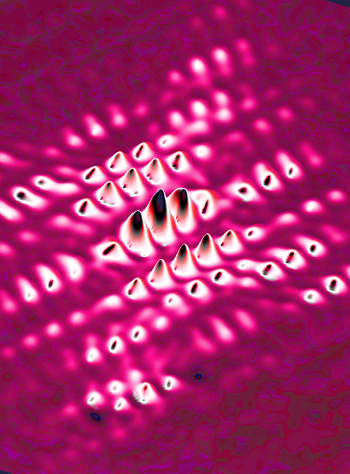 The study showed that two vibrating drumheads, each the width of a human hair, can display the “spooky action at a distance” that famously troubled Einstein.

The work opens the door to the future demonstration of teleportation between massive objects and the study of the poorly understood interplay between quantum mechanics and gravity.

Entanglement, whereby two distant objects become intertwined in a manner that defies both classical physics and a “common sense” understanding of reality, is perhaps one of the strangest phenomena of quantum theory.

In 1935, Einstein expressed his concern over this concept, referring to it as a “spooky action at a distance”.

But almost a hundred years later, entanglement is now considered a cornerstone of quantum mechanics, and is the key resource behind transformative quantum communication and computation technologies.

Until now, it had only been observed with microscopic systems such as light or atoms, and more recently, with electrical circuits.

After several years of preparation, an international research team including some Australian experts has prepared and detected quantum entanglement of the motion of massive objects, each with a diameter about the width of a human hair and each composed of trillions of atoms.

The experiment has been realised by precisely fabricating a superconducting electrical circuit, cooling it to about -273°C (just above absolute zero), and then carefully controlling and measuring it using weak microwave fields.

“It is, of course, immensely satisfying to see the vision that you have laid out come to fruition, and exciting to imagine where experiments like this might ultimately lead, and what fundamental insights and technological development they might ultimately yield,” UNSW Canberra Senior Lecturer Matt Woolley says.

“The next step is to demonstrate teleportation of the mechanical vibrations. In teleportation, the physical properties of an object can be transmitted using the channel of `spooky action’.”

The measurements demonstrate that control over massive mechanical objects is now at the level where exotic quantum states can be generated and stabilised.

This opens the door to new kinds of quantum sensing, communication and computation technologies, but could also enable studies of fundamental physics, such as the poorly understood interplay of gravity and quantum mechanics.