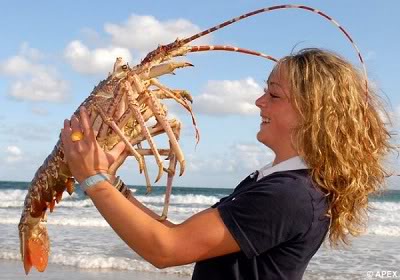 Research at CSIRO has yielded the ground-breaking double benefit of preserving wild fish stocks and improving the viability and environmental aspects of prawn farming.

Marine scientists at the Bribie Island research station off the Queensland coast have developed a way to feed growing prawns to maturity without using their usual diet of krill and small fish, the researchers say the technique could even be adapted to salmon and barramundi farms.

The CSIRO team have pioneered a way to grow vast amounts of tiny microbes in salt water ponds. The naturally-occurring microbes combined with a mix of soybean, plant proteins and trace minerals is capable of sustaining prawns in tests to full maturity.

Not only could the microbial meals save tonnes of small fish and krill for larger animals such as whales to feast on, it has also been found to spark a 30 per cent increase in prawn growth rates compared to nature.

Head of the CSIRO Food Futures flagship, marine biologist Nigel Preston, says the new aquaculture feed could be the catalyst for rapid growth in commercial industry and environmental improvements.

"I've been in this game for 30 years and there is no doubt in my mind this is the most important discovery we have made, and it is Australian knowledge that will have a major global impact," Dr Preston said. He has further predicted that ‘novacq’ (short for ‘novel aquaculture feed’) will be in wide use in Australia's $75 million prawn farming industry within two years.

"This is a game changer for the industry and consumers," Dr Preston said. "We fed pellets containing novacq to farmed black tiger prawns, and it made them grow and taste even better for consumers, the environment and prawn farmers."