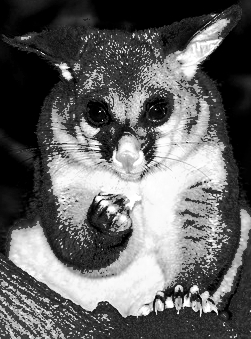 A new study of the way bacteria spread amongst possums could shed light on human epidemics.

Scientists from ANU have studied E. coli in mountain brushtail possums, and found that the bacteria were transmitted in surprising patterns.

“Even though possums are curled up together all day, daytime den sharing was not as important for the spread of E.coli as night time encounters while out foraging,” said lead researcher Dr Michaela Blyton, from the ANU Research School of Biology.

“This suggests that it’s not just how much time you spend together that’s important, it’s what you are doing during that time.”

E. coli is a widely studied bacterium which lives in most warm blooded animals.

Usuaully it is not harmful, but it is capable of causing human illnesses such as gastroenteritis through virulent strains, or if normally benign strains find their way into the wrong part of the body.

A new study, published in Ecology Letters, has found that interactions between possums were more important than home range proximity for transmitting E.coli.

“But this is like; ‘hang on, maybe there is another route for infection’.”

Dr Blyton said 106 strains of E. coli were found amongst the 50-odd possums studied, which made it possible to distinguish the individual transmission routes.

“For most other pathogens so few individuals have the disease that it’s very hard to tell the transmission patterns, unless it is an epidemic,” she said.

“However, E. coli’s prevalence amongst the possums allowed a network map of the bacteria’s spread to be developed.

“Data of this type gives a powerful predictive framework for modelling disease spread.”

The team tracked possums’ interactions with collars which recorded when two possums came within three metres of each other.

Radio transmitters on the collars allowed scientists to find the location of the possums’ dens up to 60 metres off the ground in the high mountain ash forests of the Victorian Alps.

“Knowing the transmission route changes how we model pathogen spread in humans and between livestock and wild animals, which can be important for controlling disease,” she said.