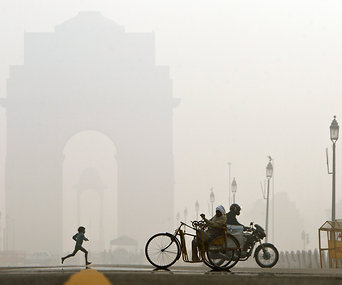 New data from the World Health Organization shows that 9 out of 10 people breathe air containing high levels of pollutants.

“Air pollution threatens us all, but the poorest and most marginalized people bear the brunt of the burden,” says Dr Tedros Adhanom Ghebreyesus, Director-General of WHO.

“It is unacceptable that over 3 billion people – most of them women and children – are still breathing deadly smoke every day from using polluting stoves and fuels in their homes. If we don’t take urgent action on air pollution, we will never come close to achieving sustainable development.”

WHO estimates that around 7 million people die every year from exposure to fine particles in polluted air that penetrate deep into the lungs and cardiovascular system, causing diseases including stroke, heart disease, lung cancer, chronic obstructive pulmonary diseases and respiratory infections, including pneumonia.

Around 3 billion people – more than 40 per cent of the world’s population – still do not have access to clean cooking fuels and technologies in their homes, the main source of household air pollution.

WHO has been monitoring household air pollution for more than a decade and while the rate of access to clean fuels and technologies is increasing everywhere, improvements are not even keeping pace with population growth in many parts of the world, particularly in sub-Saharan Africa.

WHO recognises that air pollution is a critical risk factor for noncommunicable diseases (NCDs), causing an estimated one-quarter (24 per cent) of all adult deaths from heart disease, 25 per cent from stroke, 43 per cent from chronic obstructive pulmonary disease and 29 per cent from lung cancer.