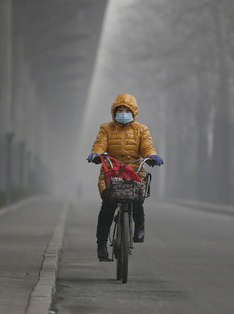 The smoke and fumes from industry, transport and agriculture have been officially recognised as cancerous.

Pollution has been classed as “carcinogenic” by the World Health Organisation.

A report from the UN’s International Agency for Research on Cancer (IARC) says that in 2010, 223,000 deaths from lung cancer worldwide resulted from air pollution. There is also strong evidence it increases the risk of bladder cancer.

“Our task was to evaluate the air everyone breathes rather than focus on specific air pollutants,” IARC deputy head Dana Loomis said in a statement.

“The results from the reviewed studies point in the same direction: the risk of developing lung cancer is significantly increased in people exposed to air pollution.”

The new claim only adds to the long list of risks (including respiratory and heart diseases) linked to pollution caused by transport, power generation, industrial or agricultural emissions and residential heating and cooking.

China is one of the worst affected countries, hit by the dual-impacts of rapid industrialisation and a poor standard of public healthcare.

Researchers at IARC reviewed thousands of studies on air pollution, many of which tracked populations over the course of decades. Other research was conducted in which mice exposed to polluted air were found to experience an increased incidence of lung tumours.

The IARC agency now classifies both air pollution and “particulate matter” - a major component of it - among its Group 1 human carcinogens. It places pollution alongside more than 100 other known cancer-causing substances in Group 1, including asbestos, plutonium, silica dust, ultraviolet radiation and tobacco smoke.

“There have been more than 950 agents that have been evaluated, and more than 100 of these have been classified as carcinogenic to humans. This is the highest classification group, meaning that we know that it is causing cancer in humans,” says IARC’s Dr Kurt Straif.

“We now know that outdoor air pollution is not only a major risk to health in general, but also a leading environmental cause of cancer deaths.”

Dr Jim Marcos from the Australian Lung Foundation said in an interview over the weekend that pollution is a universal problem, and that there is virtually no such thing as clean air anymore.

“What we call the ‘toxic’ chemicals they're not usually visible - you know all those nitrous oxides and sulphur dioxides and carbon monoxide and ozone. They're all invisible, and often you can't smell them either... All these things add up. There's just no amount of safe exposure to air pollution,” Dr Marcos said

Dr Dana Loomis from the IARC said the problem must be tackled on a global scale.

“Air belongs to everybody. Nobody has private air. We can't do very much to change the air we breathe, and we are all responsible for it. This really needs collective public health action to solve the problem.”

More details from the report are available here.