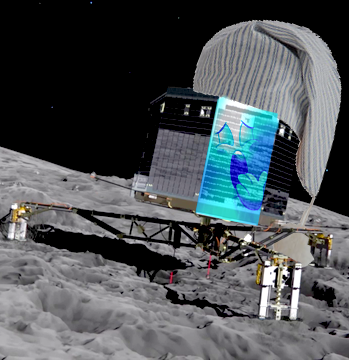 Philae is back - the European Space Agency (ESA) has received signals from its comet lander after months in the dark.

Philae became the first spacecraft to land on a comet after it was dropped on to the surface of Comet 67P by its mothership, Rosetta, last November.

The solar-powered robot explorer squeezed in just 60 hours of work before its battery ran flat.

But, Philae has since moved closer to the Sun, and the slow rotation of the comet on which it sits has been giving it a few hours of recharge every day.

Philae was able to contact Earth, via Rosetta, for 85 seconds over the weekend.

“Philae is doing very well. It has an operating temperature of -35C and has 24 watts available,” said Philae project manager, Dr Stephan Ulamec.

“It's been a long seven months, and to be quite honest we weren't sure it would happen - there are a lot of very happy people around Europe at the moment,” ESA's senior scientific advisor, Prof Mark McCaughrean, told the BBC.

“I think we're optimistic now that it's awake that we'll have several months of scientific data to pore over.”

While it is back to work for many of the experts involved, Philae’s re-awakening is an astonishing and exciting breakthrough for the team.

The probe should now have a few intermittent months to analyse the ice and rocky fragments that make up the comet 67P.

Comets like the one Philae has attached itself to contain water, carbon and sometimes amino acids, the sorts of molecules responsible for kick-starting the formation of life.

When Philae first landed on 67P, it ended up in a dark, dusty ditch, and was unable to attach one of its most important scientific devices; a drill for collecting core samples.

But the scientists say they may now be able to drill into the comet and examine its chemical make-up. They say this is the top priority for the rest of the mission, especially as the comet approaches the Sun and begins to give off even more vapour and gas as it heats up.

Regardless of how much more progress is made, the Philae mission remains one of the most successful and incredible space exploration achievements to date.

The effort to land the probe came only after its mothership, Rosetta, lay dormant in space for 10 years, waiting for the comet to turn up before it honed-in to deliver Philae.

Rosetta now orbits the comet from a distance, acting as a pass-through for the reams of information generated by the probe.

Comet 67P is currently 205 million km from the Sun, and getting closer.

In August it will be as close as 186 million km, before it sweeps back out into the outer Solar System.

More details on the mission overall are available here.

The ESA posts updates on the mission on its website, here. 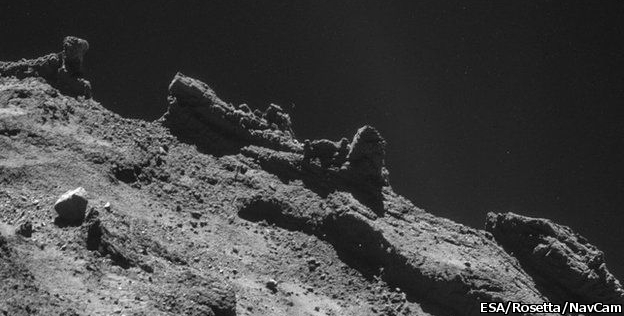