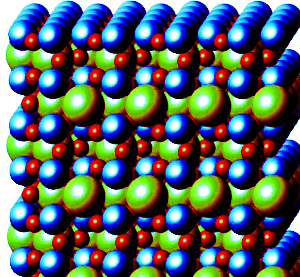 Breakthroughs have brought the possibility of functional ‘Mottronic’ devices a bit closer.

‘Mottronics’ is a term hardly known outside the deep world of experimental electronics.

It refers to materials – mostly metal oxides – that can be induced to transition between electrically conductive and insulating phases, and is named after physicist and Nobel laureate Nevill Francis Mott.

If it were possible for the transition from conductor to insulator to be controlled, Mott materials could potentially form future transistors and memories with much higher energy efficiencies and faster switching speeds than ever before.

With this goal in mind, researchers at Berkeley Lab’s Advanced Light Source (ALS) in the US say they are approaching an effective method of control.

The materials used for the latest experiments measured just a few atoms thick.

“Our work shows how an epitaxial mismatch in the lattice can be used as a knot to tune the energetic landscape of Mott materials and thereby control conductor/insulator transitions,” says Jian Liu, a post-doctoral scholar and lead author on a paper describing the efforts in the journal Nature Communications.

“While some of these phases are not obtainable in conventional ways, we were able to produce them in a form that is ready for device development.”

The energetic balance of these interactions determines how easily electricity is conducted by electrons moving between the nickel and oxygen ions. By applying enough epitaxial strain to alter the space between these ions, Liu and his colleagues were able to tune the energetic balance and control the conducting/insulating transition.

In addition, they found strain could also be used to control the nickelate’s magnetic properties.

“Magnetism is another hallmark of Mott materials that often goes hand-in-hand with the insulating state and is used to distinguish Mott insulators,” says Liu.

“The challenge is that most Mott insulators, including nickelates, are antiferromagnets that macroscopically behave as non-magnetic materials.

“We were able to directly track the magnetic evolution of our thin films while tuning the metal-to-insulator transition. Our findings give us a better understanding of the physics behind the magnetic properties of these nickelate films and point to potential applications for this magnetism in novel Mottronics devices.”

The Nature Communications paper is titled “Heterointerface engineered electronic and magnetic phases of NdNiO3 thin films”, and has now been made available online.