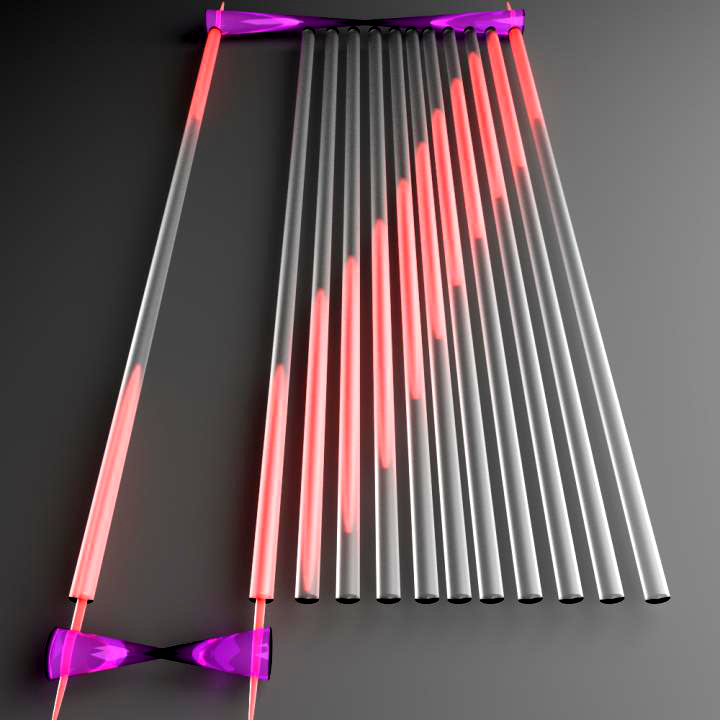 Another day, another baby step on the path to quantum computing.

RMIT researchers have trialled a quantum processor capable of routing quantum information from different locations, in a critical breakthrough for the creation of next-gen devices.

Quantum routing will be key for the development of a “quantum data bus”; a vital component of future quantum technologies.

The research team demonstrated for the first time the perfect state transfer of an entangled quantum bit (qubit) on an integrated photonic device.

“The last 10 years has seen a wealth of theoretical proposals but until now it has never been experimentally realised.

“It’s a breakthrough that has the potential to open up quantum computing in the near future.”

The perfect state transfer is applied to one photon of an entangled pair, relocating it to a distant location while preserving the delicate quantum information and entanglement.

A visualisation of that entanglement can be seen in the graphic to the right.

The difference between standard computing and quantum computing is that qubits could solve problems in seconds that would take a standard PC a near-eternity.

“Quantum computers promise to solve vital tasks that are currently unmanageable on today’s standard computers and the need to delve deeper in this area has motivated a worldwide scientific and engineering effort to develop quantum technologies,” Peruzzo said.

“It could make the critical difference for discovering new drugs, developing a perfectly secure quantum Internet and even improving facial recognition.’’

Peruzzo said a key requirement for any information technology, along with processors and memories, is the ability to relocate data between locations.

Full scale quantum computers will contain millions, if not billions, of quantum bits (qubits) all interconnected, to achieve computational power undreamed of today.

While today’s microprocessors use data buses that route single bits of information, transferring quantum information is a far greater challenge due to the intrinsic fragility of quantum states.

“Great progress has been made in the past decade, increasing the power and complexity of quantum processors,” Peruzzo said.

The protocol developed by RMIT in collaboration with international experts could be implemented in large scale quantum computing architectures, where interconnection between qubits will be essential.

“During the protocol, the fragile quantum state is maintained and, critically, entanglement is preserved, which is key for quantum computing.”