Pattern shows man is not the only pensive primate 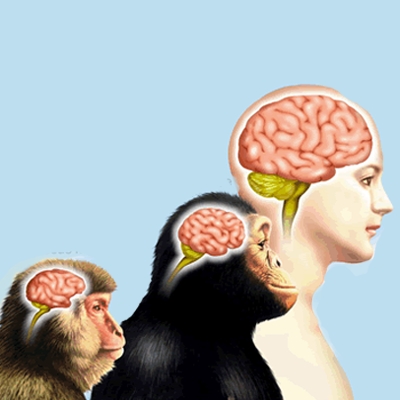 Neuroscientists have shown that virtually all primates follow a particular genetic code for brain development, showing humans are not the sole keepers of high-order brain functions for planning, complex decisions and speech.

A new study published in the Journal of Neuroscience has shown that there is a genetic program that all primates posses which guides our brains’ development. The substantial enlargement of some areas of the brain, which some believe makes us ‘human’, can be seen across primate species of all sizes.

Professor Marcello Rosa and his team at Monash University's School of Biomedical Sciences and colleagues at Universidade Federal do Rio de Janeiro, in Brazil, used computer modelling to demonstrate that the neural circuits which give humans their advanced cognition skills could have emerged as a natural consequence of the evolution of larger brains.

“We have known for a long time that certain areas of the human brain are much larger than one would expect based on how monkey brains are organised,” Professor Rosa said.

“What no one had realised is that this selective enlargement is part of a trend that has been present since the dawn of primates.”

Using previously prepared brain maps, MRIs and models, neuroscientists have conducted a new survey of the size of various brain parts in humans and three monkey species: marmosets, capuchins and macaques. Their findings suggest two regions, the lateral prefrontal cortex and the temporal parietal junction, expand disproportionally to the rest of the brain.

Lead author Tristan Chaplin, from the Department of Physiology says there is a pattern to the way those parts expand.

“When you go from a small to big monkey - the marmoset to macaque - the prefrontal cortex and temporal parietal junction get larger relative to the rest of the cortex, and we see the same thing again when you compare macaques to humans.”

“This trend argues against the view that specific human mutations gave us these larger areas and advanced cognition and behaviour, but are a consequence of what happens in development when you grow a larger brain,” Tristan said.

A key fact highlighted by researchers is that the genetic pattern of brain development is consistent across primates from all over the world, which have for millennia evolved entirely separately.

The study will now be expanded to cover more primates, to make sure the pattern persists.

The paper is available through the subscription-based Journal of Neuroscience.