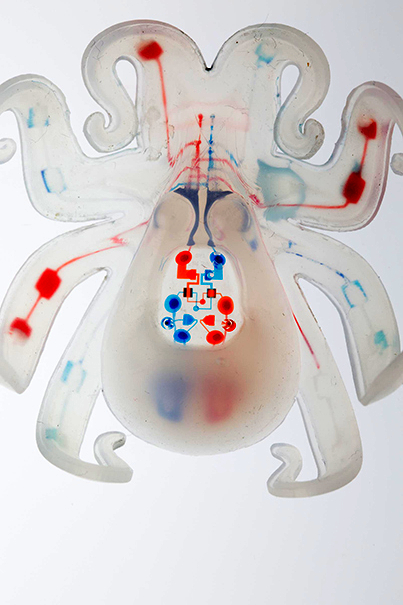 Harvard engineers have created what they called the world’s first entirely ‘soft’ robot.

The field of soft robotics has a lot of promise for changing the ways that humans interact with machines.

“One longstanding vision for the field of soft robotics has been to create robots that are entirely soft, but the struggle has always been in replacing rigid components like batteries and electronic controls with analogous soft systems and then putting it all together,” said Harvard researcher Robert Wood.

“This research demonstrates that we can easily manufacture the key components of a simple, entirely soft robot, which lays the foundation for more complex designs.”

Using a hybrid assembly approach that includes soft lithography, moulding, and 3-D printing, the team is able to print each of the functional components required within the soft robot body, including fuel storage, power, and movement.

Octobot is pneumatic, powered by gas under pressure.

A reaction inside the robot transforms a small amount of liquid fuel (hydrogen peroxide) into a large amount of gas, which flows into Octobot’s arms and inflates them like balloons.

To control the reaction the team used a microfluidic logic circuit; a soft analogue of a simple electronic oscillator that can control when hydrogen peroxide decomposes to gas.

“This research is a proof of concept,” said graduate researcher Ryan Truby.

“We hope that our approach for creating autonomous soft robots inspires roboticists, material scientists, and researchers focused on advanced manufacturing.”

The full study is accessible here, while videos demonstrating the technology can be seen below.